On Tuesday July 21, 2020 during a hot Southeast Asian summer, I received the fateful text we’d all been preparing for since a cold February winter. Best friend and charismatic composer Vũ Nhật Tân, aged 49, had at 21h04 finally released his body and passed on to his next life after a long and difficult battle with cancer.

Today, Wednesday October 28, 2020 is the 100th Day since Tân’s death and an auspicious day for remembering the departed. Called “Tốt Khốc” or “The Last Cry” the 100th Day is part of a series of Vietnamese Buddhist rituals that have been strictly observed. Indeed, there are a group of Buddhist monks meditating on his spirit daily for the next decade preparing Vũ Nhật Tân for a more positive reincarnation.

For eight months Jan and I were truly on the other side of the world.

As we say a “good riddance” to the chaotic Year of the Boar and as the more hopeful Year of the Mouse approaches on Saturday January 25, 2020, my thoughts and dreams return easily to 2018. That was the year I experienced my first Vietnamese Tết Lunar New Year in Hà Nội, the Year of the Dog.

“Anh Jeff, we want to show you and chị Jan the real Việt Nam!” said our good friends.

END_OF_DOCUMENT_TOKEN_TO_BE_REPLACED

Days are long but years are short. The last short five years bear witness to many long days of hard work, resulting now in the inspiring progress of my friends and colleagues in the Hà Nội New Music Ensemble. I’m proud to announce our impressive fifth anniversary season, HANOISE!

International collaborations define our fifth season, as we build new friendships and strengthen old partnerships with each concert. We’ll be working with two Vietnamese ancient music groups, the Phú Xuân Ensemble of Huế and the Đông Kinh Cổ Nhạc/Ancient Ensemble of Tonkin of Hà Nội as well as members of the Hong Kong New Music Ensemble in March of 2020. In October 2019, members of the Ensemble Modern in Germany and Arditti String Quartet will join my friends in concerts both in Hà Nội and Hồ Chí Minh City, sponsored by the Goethe Institut. The season opens Friday September 6th at 20h00 at the Vietnam National Academy of Music as we present The New Yogyakarta Contemporary Ensemble and concludes in April 2020 with a final concert I’m looking forward to conducting.

END_OF_DOCUMENT_TOKEN_TO_BE_REPLACED

And always memories upon memories of the amazing cuisine of Việt Nam!

END_OF_DOCUMENT_TOKEN_TO_BE_REPLACED

”Bác Jeff!” breathlessly whispered one of my Vietnamese colleagues, hurriedly finding me back stage as we were all getting ready to perform. “We must wait to start the concert. We have over 1,000 people trying to find seats, more than the auditorium can handle. Uncle Jeff this never ever happen before!”

In the Path of the Ancestors indeed proved to be the right title at the right time for the Hà Nội New Music Ensemble. Post concert noise and chatter continues to flood the city’s cultural discussions while both Vietnamese national and international television networks can’t seem to get enough of me, resulting in very good media exposure for a new music group in its fourth season.

END_OF_DOCUMENT_TOKEN_TO_BE_REPLACED

In the Path of the Ancestors is my next concert with the Hà Nội New Music Ensemble. My friends here always find wonderful and poetic titles for our programs, they can’t do otherwise. In a long career devoted to new music, conducting over forty world premieres, numerous recording sessions, securing commissions, animating second performances, planning tours and collaborations, this concert at 20h00 in the Grand Hall of the Việt Nam National Conservatory of Music on Friday March 22, 2019 still looms as a milestone.

Three generations of composers are coming together. My Hà Nội New Music Ensemble will be joined by a cast of national treasures, whiz-bang technology, guests from the Hong Kong New Music Ensemble, and the light bearing Ancient Ensemble of Tonkin/Đông Kinh Cổ Nhạc led by Đàm Quang Minh. Cue national and international television broadcast by the major network of Việt Nam, VTV1!

For a new music concert? For a new music group four years old? Yes. After thirty years of new music work in the United States, this Vietnamese recognition is, trust me, a genuine milestone.

END_OF_DOCUMENT_TOKEN_TO_BE_REPLACED

Our first meeting at Public Coffee in the Neustadt District of Hamburg.

Nothing is random. In June of 2017, on our way to take in the conclusion of the opening season of the Elbphilharmonie in Hamburg with Schoenberg’s Gurrelieder conducted by our friend of over forty years, Kent Nagano, I noticed a Facebook post of a young Vietnamese student who was part of a team contributing a technology component to a Hamburg Staatsoper production of Henry Purcell’s Dido and Æneas.

That got my attention for all types of reasons!

END_OF_DOCUMENT_TOKEN_TO_BE_REPLACED 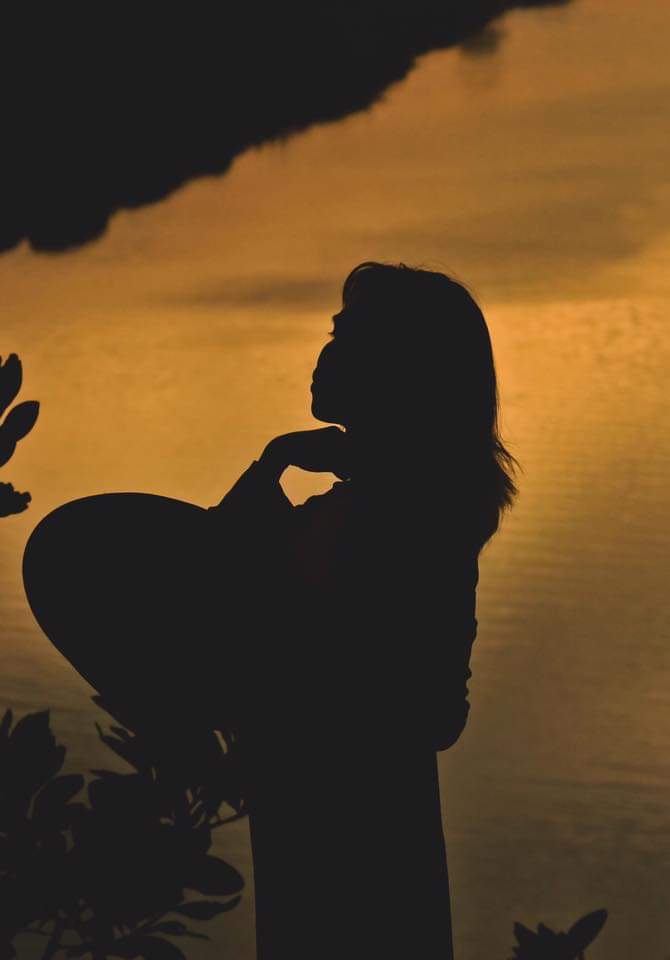 A silhouette of my friend Hương Lan in Huế.

“I have been trying not to view Japan as an absolute but as a duality, otherwise the tradition does not come alive but remains an unavoidable antique.”

In 1989 Toru Takemitsu wrote for me an essential article, Sound of East, Sound of West. His perspective gives the serious reader a magnetic compass for navigating the shifting soundscapes of our musical world. And like any map locating an unknown destination, my dog eared copy of this East Meets West article, a transcription of a lecture Takemitsu delivered at Columbia University in New York City, has been read and re-read more times than I can count.

On Saturday night December 1st, 2018 at 20h00, the Institut-Français Hà Nội sponsors the ongoing collaboration of the Hà Nội New Music Ensemble and the Đông Kinh Cổ Nhạc/Ancient Ensemble of Tonkin at L’espace at 24-26 Tràng Tiền near the Hà Nội Opera House in the Hoàn Kiếm District. Thank you, France!

END_OF_DOCUMENT_TOKEN_TO_BE_REPLACED 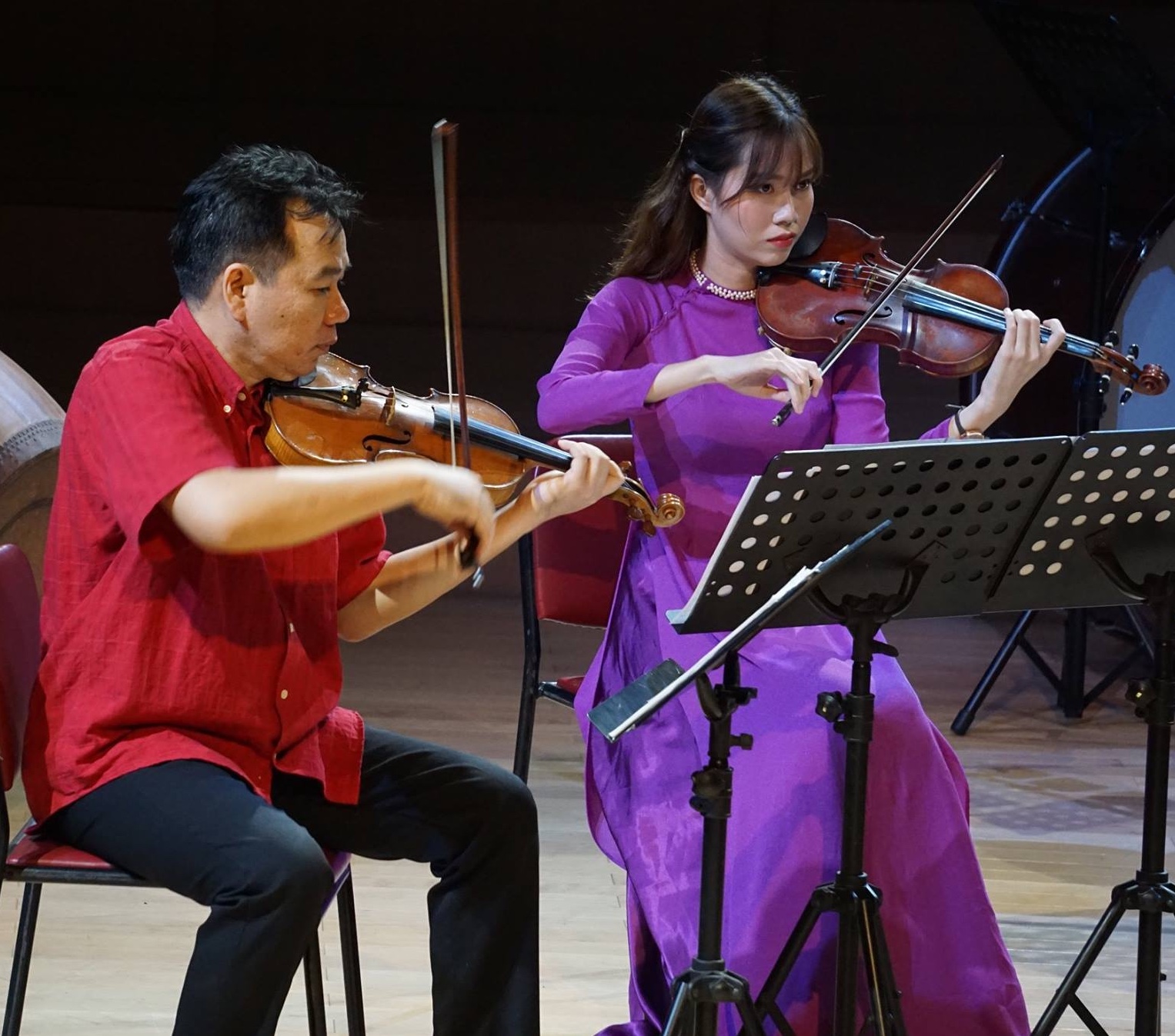 I may be house sitting for a friend in San Francisco this September, but unlike Tony Bennett I’ve left my heart in Hà Nội, Việt Nam!

The opening concert of the 2018-19 season of the Hà Nội New Music Ensemble will get underway on Saturday September 8 at the Manzi Art Space at 8 PM. The first of five programs this season, the most ambitious we’ve planned, begins with a Composer Portrait concert of works for strings by Vũ Nhật Tân, entitled Màu Âm in Vietnamese, Shades of Sound in English, Couleurs des son in French, juxtaposed with ancient Vietnamese music from our friends in the Ancient Ensemble of Tonkin.

END_OF_DOCUMENT_TOKEN_TO_BE_REPLACED 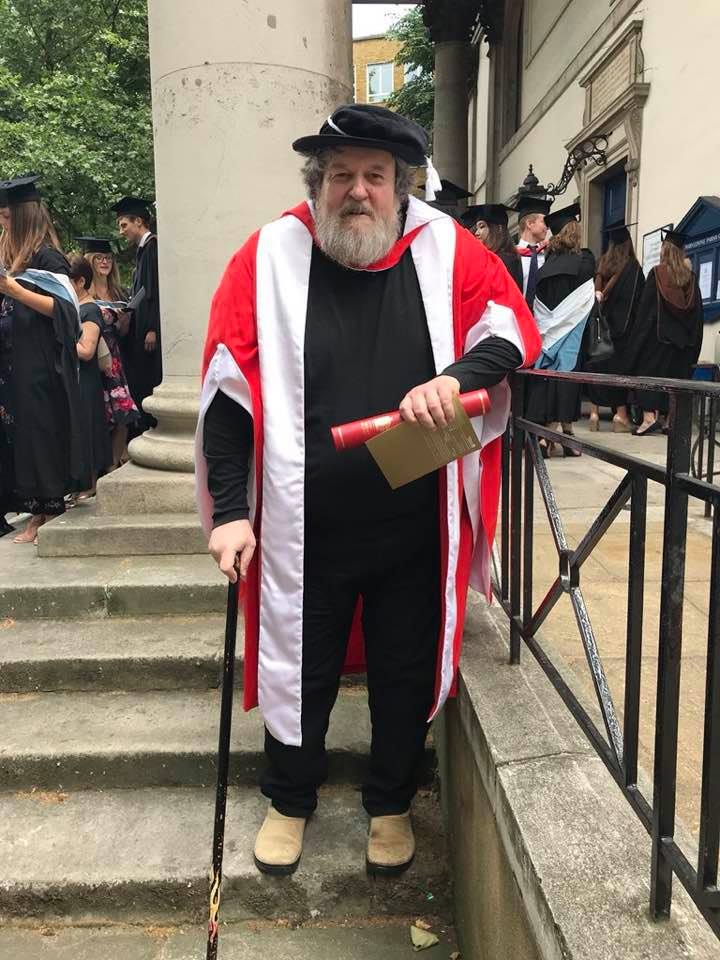 A perfect last photo of Oliver Knussen on July 6, 2018 at the Royal Academy of Music in London, receiving an Honorary Doctorate.

”Aren’t you the fantastic horn player I’ve been hearing?” came an introduction towards my direction, in that one of a one voice. We were in the Music Library at Tanglewood in the summer of 1980. As fate would have it on that humid Berkshire afternoon in July, I was studying the score of Voices by Hans Werner Henze and he was working on Where The Wild Things Are. I didn’t realize that just opening that particular Henze score would be all the personal introduction needed for Oliver Knussen to strike up a conversation with me.

A warm friendship began that would last for the next thirty eight years, until his untimely death a few weeks ago. We always remained in touch, either here in Los Angeles, where he conducted often in the 1980s, during our engaging phone calls, or on our return trips to Tanglewood to visit my wife Jan’s family. “I’ve certainly met you in past life!” would become Olly’s charming Leit-motif for saying hello to Jan.

Grief creates a strange energy, and I know that I am not alone coping with the shock that Olly is no longer with his daughter Sonya, with my wife Jan, with me, with any of his friends, with the entire new music community all over the world. A man of uncommon common sense, don’t let appearances fool you. Of all of Oliver Knussen’s gigantic appetites, the largest was for music.