Zone 9 on the edge of the French Quarter in Hà Nội.

What to do with a run down former pharmaceutical factory built by the French in 1905?  Here’s a recipe: combine young take-on-the-world types from a Hà Nội new generation of smart entrepreneurs. Mix a wide spectrum of design, cuisine, art, music, and what the hell throw in a major day care center, while your’e at it throw in a space for experimental contemporary music, bring home the brain drain from San Francisco and Manhattan, renovate an architectural relic from the French (I kid you not there is a Vietnamese homage to La Durée) and the result is the most amazing urban redevelopment project imaginable.

If Confucius had the Internet he’d be right at home with the communal structure of this amazing and still emerging complex.  Uncle Hồ has to be smiling down from heaven as a French building is transformed into a uniquely Vietnamese success story.  Zone 9 is a grab-you-by-the-throat we-have-arrived moment for Hà Nội. Let’s get started.

Right now there’s about sixty tenants spread over three major structures.  Things opened in June of this year and many groups and businesses are in the final stages of construction. Here’s the ceiling of, oh I hate this word, a signature Japanese restaurant.  The words international chic come to mind.

Strategy is in the Vietnamese DNA.  No matter your opinion, the truth is that Hồ Chí Minh defeated both the French and the Americans. He would certainly flunk Osama Bin Laden for his horrendous messaging problems.  So let’s meet one of the leaders of Zone 9.

Quý is a force of nature, the only Vietnamese I’ve met who keeps to a one syllable name.  As project director for Zone 9 she is organizing a major electronic sound installation for the main courtyard with Vũ Nhật Tân.  Move over MIT and IRCAM. Stop rubbing your eyes. An important urban development project in Hà Nội is  turning to Vũ Nhật Tân and his experimental music, not pop, to create a major launch event.  Well, OK Tân tells me he’ll have a beat for a change, but you get the picture. Stay tuned, interconnected world. Ascending Dragon and the LA International New Music Festival got America to Tân first so you know the ground floor, so to speak.

Tân plans to wire Zone 9 from this point for a major launch.

Let’s move on. To refresh your memory here is La Durée on the Champs Élyssés in Paris.

Did I mention that Hồ Chí Minh cooked for L’Escoffier?  The cuisine world here in Hà Nội has more than echoes of France, there are quite a few Paul Gauguin’s of the French cuisine world cooking here.  Passion and Dragon fruit aren’t French, after all. Vietnamese wive’s also help with recipes, as with Didier Coulou.

Here is La Durée in Zone 9.

See if you can spot me, Jan and Tân.

Need to find a high end designer out fit for Hà Nội chic?  Problem solved next door, and in fact there are enough designer places to make you realize that most of our clothes are made in this part of the world.  People here know that, so let’s just say that the Empire is Striking Back. 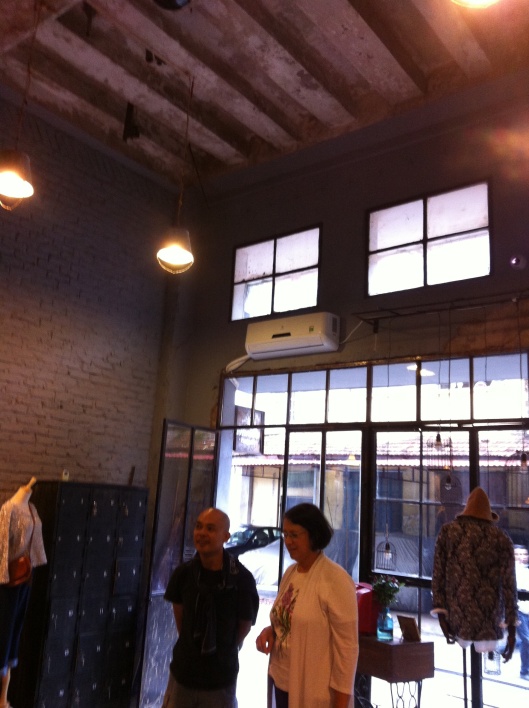 Tân and Jan looking at a designer shop next to La Dureé at Zone 9.

Now imagine you are looking for a film location where someone needs to get whacked in New Jersey.  The next building of Zone 9 doesn’t look like much, but what you see is not what you get. Until you step inside.  A San Francisco brain drain return has a trendy bar, a New York fashion designer, Cattan, returning home to Hà Nội. Need a place for a wild concert of contemporary music? Let’s just say I didn’t come to Việt Nam for the fifth time to have a bowl of noodles. Check this space out.  Do I hear cultural exchange with the next LA International New Music Festival in the future?  We’ll see but they have the performing space under their control.

I hope you still have some energy. Because you are about to meet someone who has the guts, determination, gumption and vision to make Đom Đóm Music in Zone 9 a space for experimental and new music that can put Việt Nam on a big map.

Why I am I so sure of myself about this person?  Let’s just say that when you receive a grant from the Asian Cultural Council in New York City to go to the U.S. to study abroad and you choose Queens, NYC, you’ve got grit, self knowledge and a burning passion to bring it home and change things around.

Đom Đóm Music is her dream, and don’t let the English sound fool you.  Đom Đóm means Firefly in Vietnamese. She is energy burning from within during a dark night.  Meet Trần Kim Ngọc. 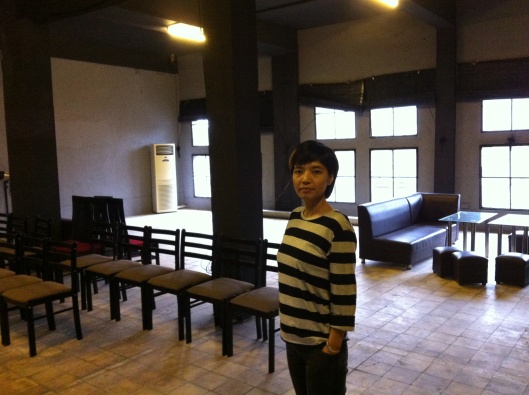 Move over, Bang On A Can: Trần Iim Ngọc in her Đom Đóm Space for Experimental Music at Zone 9.

After 27 years of leading Southwest, Jan and I found our mirror image at Zone 9 with Trần Kim Ngọc and Vũ Nhật Tân.  We talked, shared, laughed, plotted and are betting on Dom Dom Music when we are next in Las Vegas.  Ngọc had an inner glow that we were nominated for Gabriela Ortiz for a best composition. Women rule.  Ngọc has a big opening concert October 5.  Stay tuned.

Need a Day Care Center?  Why, you ask?  Because these young professionals working at Zone 9 have families.  So of course a day care center is part of the plan, with a dance floor rehearsal room ready to go.  Brain Drain No More.  Did I mention that the director of the Day Care project LIVES on site?

Meet Tân Cảm Phường as she and Jan have an impromptu “I can’t believe what I’m seeing” conversation in front of her facility, which opens October 6. The dance floor room is past the painting.  You can see the piano in the window. 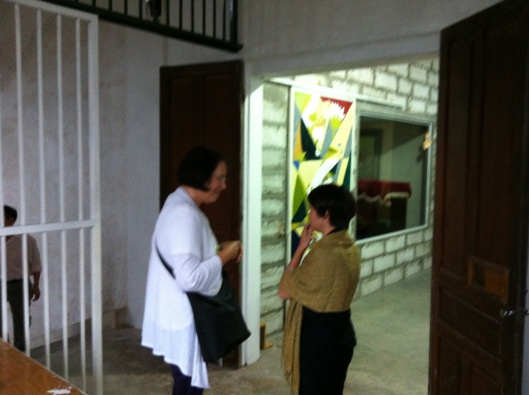 One floor above Phường’s center is Work Room Four, a British owned gallery with the Hà Nội Open Exhibition, loosely based on The Royal Academy summer show in London. All in one complex that looks gritty but, well, the French left a mess that we prolonged with what is here known as the American War so it has taken a while to clean the place up. 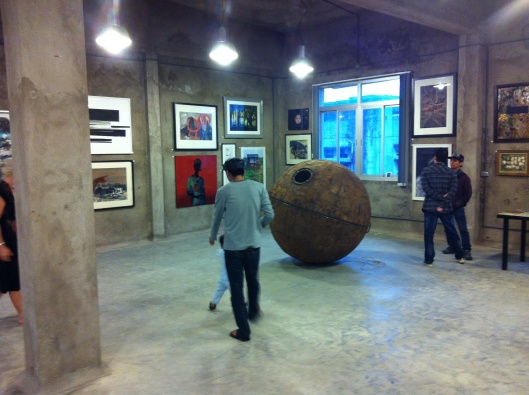 And for all of you who think that President Obama is a socialist, take a look at this mural painted on the entry way to a Zone 9 beer club.  Humor aside he is highly respected in these parts, with changes in Myanamar being on the top of the appreciation list. And the Vietnamese are glad Syria is proceeding diplomatically.  They know a lot about American bombing raids…. 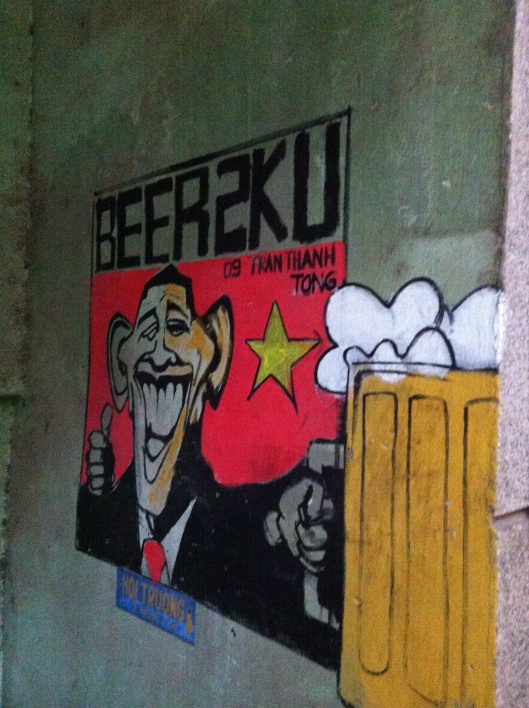 Phew…….thank God autumn arrived and the humidity has broken, leaving everybody with a smile on their face and our clothes cool and dry for a change. What an introduction to Zone 9 and there will be more on this amazing place as my trip here continues.

And speaking of bombing raids, the next day Tân took us over the Long Biên Bridge to the Red River.  Google it if you don’t recognize the name.  My next blog will have some photos you’ll want to see if you remember the Việt Nam War. What were we thinking? But that’s in the past.