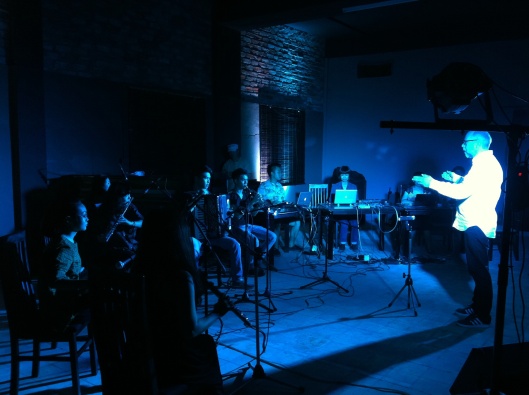 Now it’s official. To a packed house of creative music fans, Trần Kim Ngọc’s Đom Đóm Music, the hub for experimental music and art in Hà Nội, opened on Saturday night October 5 to great acclaim. Set for the auspicious date of the first new moon in the lunar cycle for this month, a sense of event was in the air between the numerous Vietnamese and a few eager Europeans and Americans in attendance.

Đom Đóm at Zone 9 is a breaking point for a serious Vietnamese musical avant garde movement to take hold and move onto the international scene in the next decade.

Đom Đóm means Firefly in Vietnamese. The first season is supported in part by the Swedish Embassy. Trust me, Jan and I delivered enthusiastic personal endorsements to the U.S. Embassy to check out this new cultural development. And Ngọc is shrewdly working with the Việt Nam National Academy of Music to begin the long term process of training a new generation of players in computer music, electronic sampling, improvisation and old fashioned practicing. 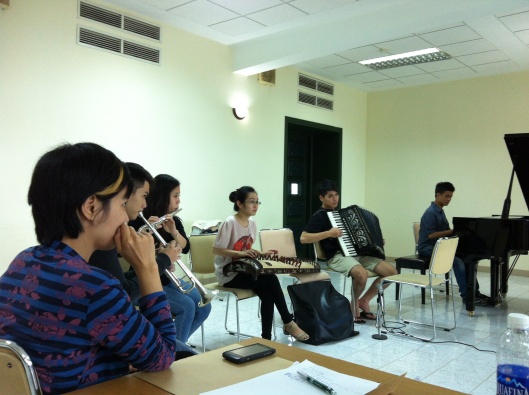 Minding the store: Trần Kim Ngọc at a VNAM rehearsal before the opening concert.

Wisely, a stalwart of the European creative music scene, Jakob Riis, was brought on hand by the Swedish Embassy to guide the launch. Spending a wonderful dinner in the Old Quarter with Jakob and Vũ Nhật Tân was a delight. His results will be developed when he returns later this year, so things are digging in. 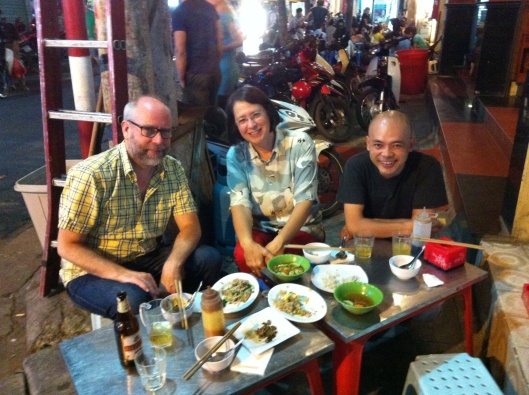 As usual at important events, the city’s main players were there and, my word, the post concert eats were Vietnamese treats of the highest quality. Reception food can be pretty dull in the West, but not here…

Đom Đóm reception, Ngọc is the woman to the left with the hat.

We’ve been meeting a growing list of visitors from Europe, along side a host of old and new Vietnamese friends. Our long lunch with Nguyễn Thiên Đạo will be a topic of an upcoming blog. But we’re all seeing the same thing. Hà Nội is moving forward.

One of my new friends from Norway, Geir Johnson, is a veteran of the whole European new music scene. You name them, he’s worked with them. He shared with me at Đom Đóm’s opening a wonderful observation of Hans Werner Henze. After he had worked in Cuba, Henze told Geir that once the Third World countries shifted, they would do serious culture better than the West.  Seemed like this prophetic observaton was coming full circle in Việt Nam.

Geir Johnson and me after a great discussion. Stay tuned….

The Đom Đóm opening was that rare concert where instead of hype driving perception, a collective energy was saying in a loud voice “We’re here.” There is much to do and the first few years are always critical for a new enterprise. But we’re all betting on Đom Đóm. The sky is the limit.

I didn’t come to Hà Nội for the fifth time for a bowl of noodles. As this trip develops, there is a lot of new information and new potential to process, and I’ve got more blogs in the pipeline with many subjects, all helping me shape a part of the next LA International New Music Festival. 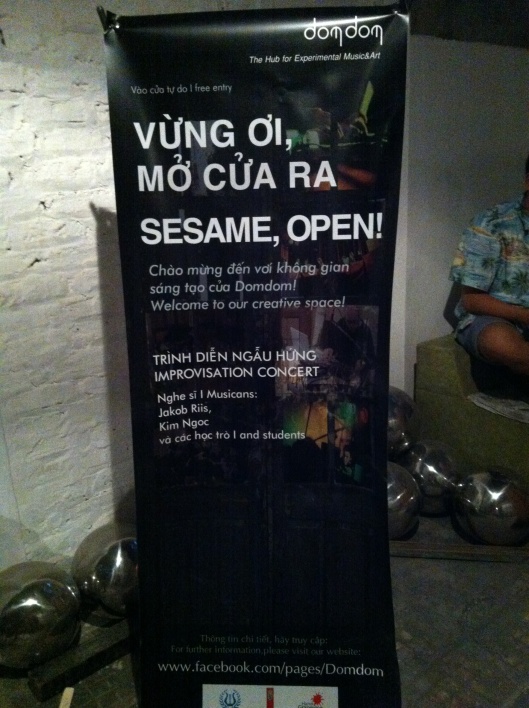