California anchors the world. As the home of two of the most important developments of the 20th century – film and technology – discovering the Golden State is important for everybody.

Anchoring California is a natural landscape of ocean to desert to mountain ranges. And vineyards. In 1973 Chateau Montelena in Napa Valley put California on the international wine map when even the French agreed the wine was great (though a blind tasting didn’t hurt). I’d not been here for over 20 years and was overdue for another visit. 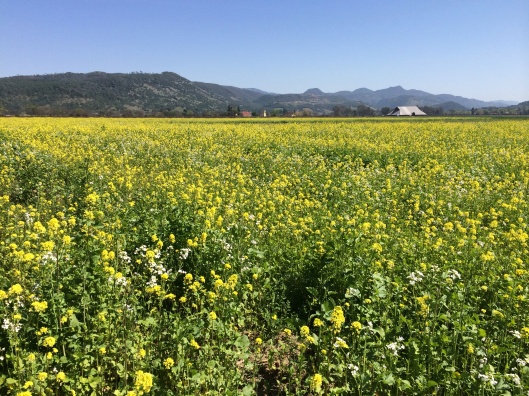 If you are looking for “best of” tips I will probably disappoint. What mother raises her child to be a critic? Not mine! But I am very partial to wisteria in bloom. So there will some indulgence along the way!

Competition and criticisms are to me pursuits best left alone. I think you learn everything from experience, plain and simple. Recognition will take care of itself. As an artist, seeing the world in terms of competition is, to me, the definition of limiting your options.

So, no, I don’t look for the best wine, the greatest meal, the definitive recording, the highest ceiling or lowest depth. I prefer to take it all in. My wife Jan is from the world of theater and drama before she found music (at the Santa Barbara Music Academy of the West). Drop her anywhere in the world and she will immediately begin to look for the reason everybody lives where they live.

For my readers in 75 countries, representing as you do every continent on the globe, I want to get you dreaming of California! I know my posts have helped many travelers already, especially in and going to Asia. Enthusiasm and readership in Mexico is also high. By mixing new music with new discoveries I hope that some of you will eventually make it to California for my next LA International New Music Festival in 2014-15!

A wisteria bough at Hess Vineyards.

One of the great things about Napa, in addition to the impressive local wine, is the 19th century architecture. A lot of people think California is young, young, young. Maybe not compared to other places, but here the late 19th century makes a big impression. Robert Louis Stevenson would attest to that!

We started our short Napa tour at the Hess Collection and Vineyeards. Not only are there wonderful wines, but there is an old building and a new art collection on Mt. Veeder that made this a great first stop.

The Hess Collection and Vineyard Estate.

Our tasting at Hess was delightful and lead by an Irish lady from Cork, Berenice. She poured the whites and reds with aplomb, we talked about James Joyce and Sam Beckett, and she agreed that art and food make sense out of life. She kindly snapped a picture for us!

Here’s to Berenice taking your picture one day!

The art work at the Hess Collection is impressive. If I could have similar financial support for concerts of new music it would be a different world! But you can’t hang music on your wall. The door between music and the visual arts world is locked very tight, at least financially. Any work by Rauschenberg easily eclipses all of John Cage’s estate, but that will be a topic for another day.

For today, when you go to the Hess Collection there are some great works. Robert Motherwell, Frank Stella, Robert Rauschenberg and Anselm Kiefer, to name a few. 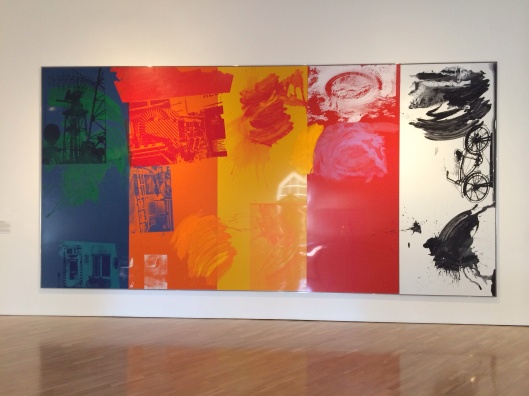 A Rauschenberg at the Hess Collection.

Born in 1945, Anselm Kiefer chronicles the challenges of postwar Germany. This work, “Am Anfang” plays on the first German words of Genesis as he recalls playing in a devastated country as a young child. 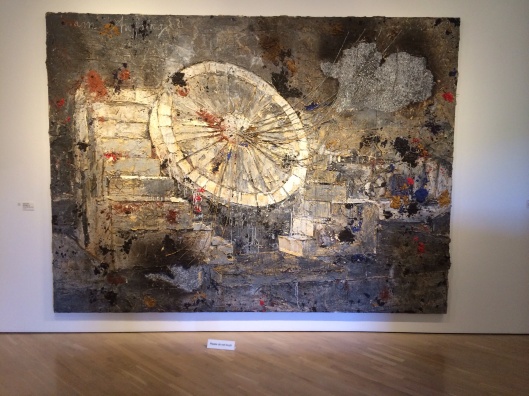 Am Anfang by Anselm Kiefer.

As you wend your way down Mt. Veeder and the Hess Collection Winery, you’ll have the option of travelling Highway 29 or crisscrossing over Napa Valley to the Silverado Trail. It’s easy to do, with the Silverado Trail a road little less travelled.

There are 400 wineries in the Napa Valley. I’ll try to get you started with 3. Of course you can find the 397 others yourself!

What also impressed me on this recent visit were the numerous old 19th century buildings throughout the Napa Valley.

The Greystone Mansion, now the Culinary Institute of America, is worth a visit.

Or you might try to the old Beringer House, home to one of the first vineyards. 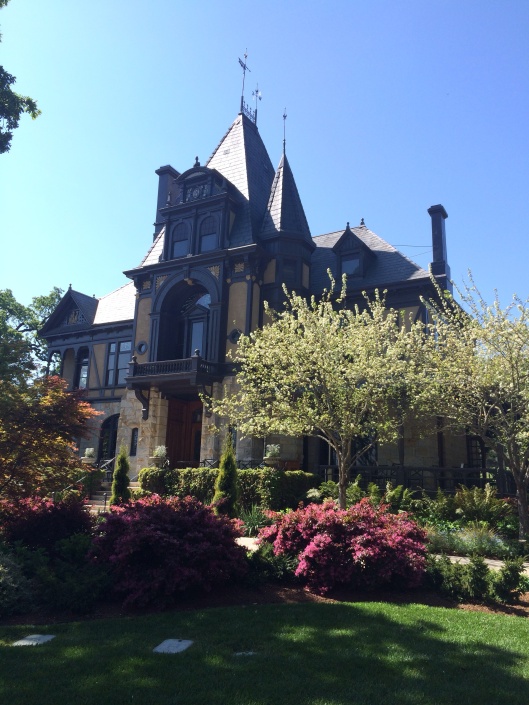 The small town of St. Helena holds many gems from times long gone. Its a West Coast echo of Berkshire towns in Western Massachusetts like Great Barrington.

But here there is wine! And where there is wine, there is olive oil. And I urge all of you to visit the St. Helena Olive Oil Co. Hopefully you will meet Hailie Emilin who not only had tremendous knowledge of the unique oils in the shop but gave us quite a look into their 1845 building.

Hailie let us in on the fact the building was originally the Bank of Italy. Which would eventually become, we were surprised to learn, the Bank of America. The 1849 Gold Rush collected huge sums of money in, yes, a fast rush of time. The sums many mines hauled are still astronomical amounts today. We are talking mega-millions in 19th century dollars. Much of that money built San Francisco and made us the Golden State. The stage set of that era is still here to enjoy. Dreamers still wanted. Like Steve Jobs. That’s California in a nutshell.

To demonstrate her point, Hailee opened what was once the vault to show us all the building inspection codes going back to 1845. A nice touch!

I’d be amiss not letting you see the inside of this lovely space. And I need to mention that you can taste EVERY item in the store. That’s rarely true in the U.S. and speaks confidently for their products.

Back to wineries. The pricing of tasting wine in Napa Valley is expensive. Sticker shock could be more accurate. But you can do some research and not need to take out a second mortgage to visit. There are over 400 wineries in the area. I have 3 reasonable tips for starters.

The tasting at Heitz Cellars is Old School. It’s free and fabulous. That’s an incentive!

Tastings are free at Heitz Cellars.

And, yes, there are seasons in California. Since the wisteria blooming time is quite short and I love wisteria, here’s another picture for you. Behind the winery is a breathtaking wisteria arbor. 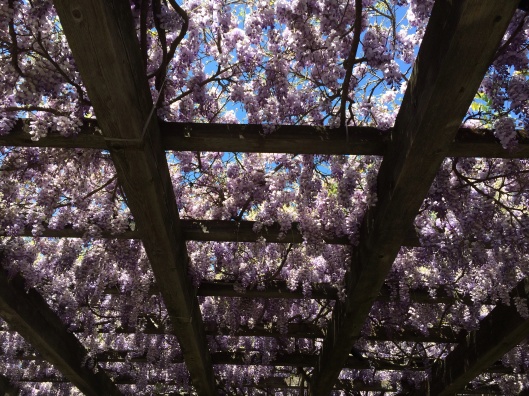 A wisteria pergola in full bloom at Heitz Cellars.

We then crossed the valley to Honig Vineyards. They have a great sauvignon blanc. And their tasting is the best imaginable. Make a reservation by email or phone. They bring the tastings to you in their garden and the conversation is a lesson in great wine information. You can’t sell what you don’t know and at Honig Vineyards they know their wines.

The vineyard of Honig Winery.

So maybe I did give you some tips after all. Remember the three H’s of Napa Valley: Hess, Heitz and Honig (there were a lot of 19th century Swiss and German winemakers in the area).

I’ll be taking you to Paso Robles and Santa Barbara area wineries in future posts. Not having been to Napa Valley in a long time I must say the trip was enjoyable, magical and captivating. Other areas in the state are less expensive and definitely less touristed (if you are in San Francisco I’d recommend Sonoma County as well). Amador County in the Gold Rush off Hwy 49 has the oldest vines in the state and the Alexander Valley, Mendocino County and Russian River are all spectacular. I’m partial to the Russian River myself! And remember, future posts will be coming about Paso Robles and Santa Barbara.

Writing about wine in California could be a book, so varied are the opportunities that await you here. But I do hope I’ve piqued the interest of my many international readers.

I want to leave you with a few more wisteria photos. It’s a weakness of mine that I don’t think is a character flaw. Here’s a throwback photo from 2002 just to prove my point. This pergola is from the ancient capital city of Nara in Japan. Can’t resist sharing it! 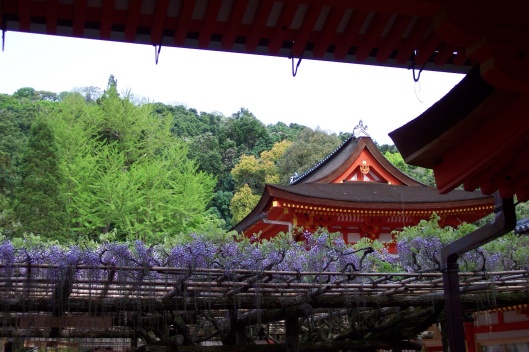 Japanese wisteria in Nara from 2002.

Jan is all smiles under the wisteria pergola at Heitz Cellars. Wish you were here!

The great American comic W.C.Fields was right. “I often cook with wine. Sometimes I even put it in the food!”

There are many parts to the United States. My country can be, and is, a very confusing place. I ran into a German businessman in Hong Kong this fall. He said he’d admired every American he’d ever met individually, me included. But at times the actions of our government were beyond his comprehension. He’s right, but I think that can be said about every country I’ve ever studied. At least I didn’t bring up WWII to make my point.

But there is only one California. And to my blog friends around the world, you are welcome and we’re here for you.  There’s a good reason California is the most visited part of the United States. Come see for yourself one day. For the next LA International New Music Festival. And the wine’s pretty good, too!