I began blogging about my LA International New Music Festival on September 17, 2013. What jumpstarted my story telling was a return trip to Vietnam, my fifth, to reconnect with old friends in Hanoi and see what new developments were underway in their one-of-a-one city, a fascinating burg if there ever was one.

My blog is now read in 78 countries with 3600 readers, so a short recapitulation is in order. My attraction for Vietnam is guided by two of the most important people in my life, my trusted acupuncturist Loi Trinh Le and my mother Louise. You can read about Trinh (her English name) in my second post from September. And that September 17th date when I started my blog?

That auspicious date would be my mother’s birthday. She’s brought me plenty of good luck hovering like an angel over all of my work in Vietnam. And mom would be thrilled about the recent visit to LA from our friends in Hanoi, the Song Hong Ensemble! 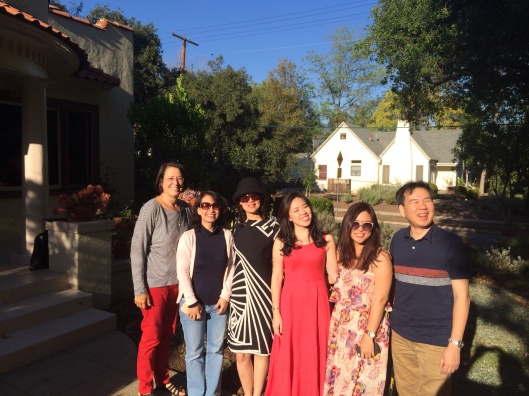 Jan and the Song Hong players in our front yard.

Jan and I love to cook. Her parents were wholesale grocers in New Jersey while my folks had a restaurant for 30 years in LA.  As you know reading my blog, food, cooking and restaurants are recurring themes with the thoughts and plots of artistic dreams under construction.

In planning a welcome celebration dinner for our Vietnamese friends, California produce and herbs from our garden had to be front and center. They’d come a long way and finding a noodle shop to rival the Old Quarter of Hanoi would be a fool’s idea.

And about those herbs in our garden. We’ve never had guests more intrigued by the smells of our California landscape! Camphor tree foliage, sage, rosemary, lavender, bay leaves, all got a wonderful garden tour. Little did I know that these players also love to cook!

Introductions are in order. I’ll start with violinist Pham Truong Son, the Song Hong leader and concertmaster of the Hanoi Philharmonic. He’s studied a lot in Oslo, Norway but this was his first trip to the U.S. His daughter Nhu Pham is at San Jose State studying graphic design. That’s motivation to come to California!

Violist Do Huong Tra My with a lavender branch.

Jan was a guiding light violist and learned early on from Eugene Lehner of the Kolisch Quartet the importance of the inner voice relating to the whole sound. Walter Trampler, a great candidate for The World’s Most Interesting Man, entrusted her with organizing his Boston University schedule and encouraged her in so many ways with the formation of Southwest in Los Angeles. He recommended she take a chance and commit to the idea of an organization. After all, he’d left the Boston Symphony to start the Chamber Music Society of Lincoln Center, a gutsy move that turned out pretty good.

Do Huong Tra My, the Song Hong violist, is a perfect template as time goes by to absorb Jan’s experience. As I look at my photos of the last week I am struck by how often these two paired up! And most every photo of Tra My has her in flight, dancing all the time. They share being born in the Year of the Horse and both have incredible full gallop energy.

Two of my favorite violists on Venice Beach.

Next up, meet violinist Phan Thi To Trinh and cellist Tracy Dao (her facebook name so I’ll use it as well) who loved our Japanese maple tree.

Welcome to Pasadena, To Trinh and Tracy!

Violinist To Trinh was part of Ascending Dragon, the largest cultural exchange in history between the U.S. and Vietnam. Very proud Secretary Hillary Clinton’s State Department supported this ground breaking project. Phan Thi To Trinh did a great job staying in touch via email and Facebook and Song Hong has its roots in Ascending Dragon. 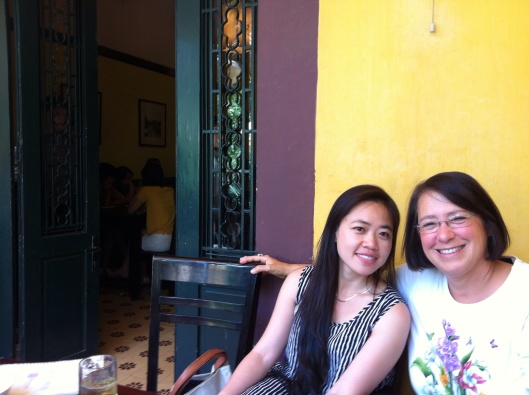 Jan and Phan Thi To Trinh in Hanoi this October.

Saving the best for last, the Song Hong pianist, Quynh Trang Pham, is a world class player, a powerhouse pianist if I’ve ever met one. Her days in Germany paid off, where she got the excellent advice to focus on chamber music and ensemble playing, not the strength of every pianist by any means.

There are times in life to pop the cork on a bottle of champagne. Twist the bottle, not the cork, mes amis! On one side of the coffee table…

And on the other side of my living room I’m with To Trinh and Tra My. To Trinh is sitting in the chair of Jan’s grandfather, a nice touch given the reverence for age and ancestors in Vietnam! 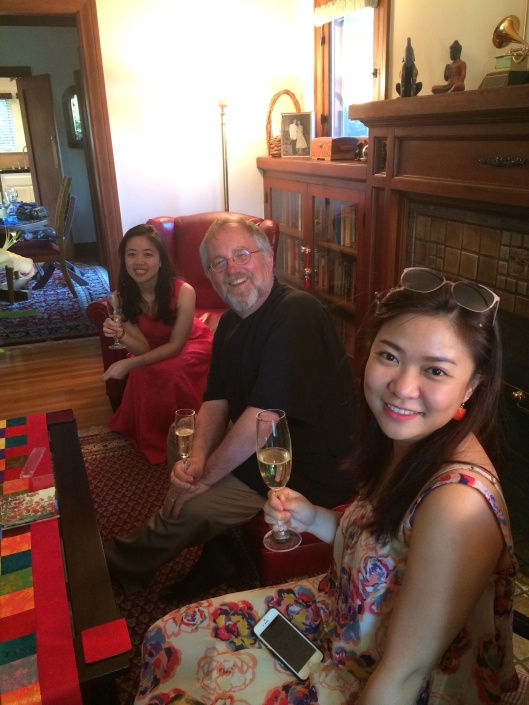 Champagne toast with Do Huong Tra My and Phan Thi To Trinh.

After champagne, we moved to the dinner table for Jan’s incredible fennel mushroom salad, marinated in olive oil, garlic and pepper. It’s simple but amazing and went well with champagne. We moved on to a California version of the French classic, coq au vin. But this chicken lived in California and was spice rubbed for three days with rosemary, ground juniper berries, salt and pepper.

Cooking tip: for a great taste rub your chicken or lamb or goose or duck for three days with spices of your taste. Put into the refrigerator in a plastic bag or cover with a seran wrap. That’s the French big secret to achieve an amazing-in-every-bite taste. Since I’m talking about Vietnam, yes, Paris will come into view soon….

But I’m from LA. So our California chicken was browned in butter and olive oil, removed from the pan for the sauteing onions, mushrooms, pancetta, and tomatoes, then cooked in a bottle of California zinfandel and some broth to cover. Once it’s gently bubbled for about 40 minutes, add green olives, pearl onions for 10 more minutes. Take out the chicken and add arrowroot and Dijon mustard (there’s France….) and furiously boil for 8 to 10 minutes to reduce the sauce. Then add the chicken back. Do all this at least a day in advance so you aren’t stuck in the kitchen with guests wondering where you’ve gone…

We talked and talked and talked, keeping them up to get over a big jet-lag hump. I opened a welcome bottle of Paso Robles port wine. California cheese with walnuts and dried fruit was followed by an apple pie from one of the great pie shops on earth. You’ve just got to go to Pie ‘N Burger in Pasadena for the real American McCoy. It’s a ritual we have every time we return from Asia just to know we’re at home! 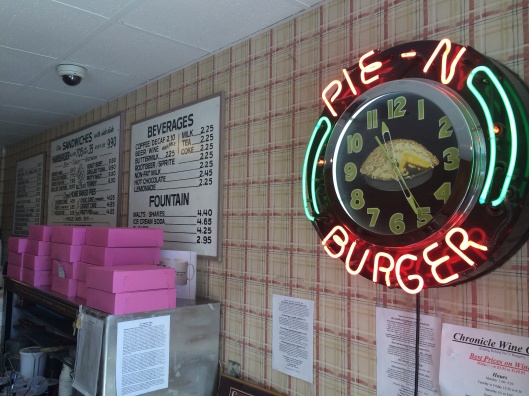 So dinner set the stage for a great week, schedules discussed and outings planned. They were also having coaching sessions at Walt Disney Concert Hall with Martin Chalifour, concertmaster of the Los Angeles Philharmonic and playing for Eduard Schmieder of Il Palpitti.

But new music is where we come in, as they’ve brought standard repertory Schubert and Schumann for Chalifour and Schmieder. Song Hong’s promise is that they have the tools to tackle challenging new music. Did I mention Paris would show up in this post? 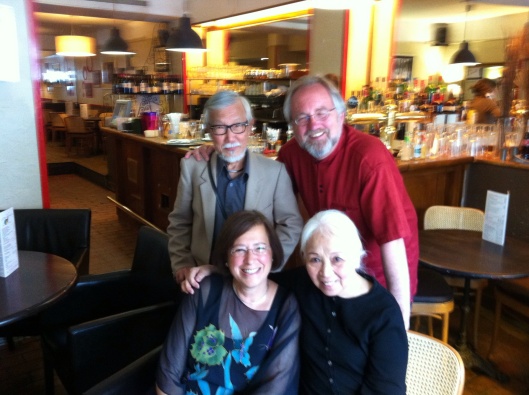 Jan and me with Ton That Tiet and his wife in a Paris cafe next to IRCAM.

In May 2011, Jan and I went to Paris. No one needs a reason to visit France but we had one in the back of our mind. We wanted a face-to-face meeting with composer Ton That Tiet, who with Nguyen Thien Dao is a founding father of Vietnamese music (you can search my blog for news about Nguyen Thien Dao, as he’s writing a new piece for my next LA International New Music Festival). My correspondence with Tiet is treasured and continues to this day about all these developments.

Tiet, his wife An Thuy, Jan and I had a four hour lunch discussing music in Vietnam. His encouragements, his dreams for his homeland, his hopes, still ring in our ears. His is the most patient music I’ve ever encountered. Buddhist mindfulness incarnate. Composer Vu Nhat Tan just met with him in Paris this February. Generations are connecting after the wars of the 20th century. He’s been waiting his whole life for a Song Hong Ensemble and knows the playing of violinist Phan Thi To Trinh, who is from Danang.

What do players need to play his music?

Take a guess, and if you come up with the vocabulary of Olivier Messiaen or Pierre Boulez put into a cocktail of Asia you’d be right. In other words players need new music chops of the first order. After a century of war that expertise isn’t found on every Hanoi street corner.

Phan Thi To Trinh at the home of Arnold Schoenberg in 2010.

How do you handle the displacement of war? What does it feel like for a culture? How do you move forward with a young generation? I knew I was planting a seed bringing the Vietnamese to the family home of  Arnold Schoenberg during Ascending Dragon in 2010.

Los Angeles knows the story of emigre artists like the back of its hand. Jan and I are life long friends with the family of Arnold Schoenberg, with his grandson Randy a loyal board member supporting our concerts. He commissioned Vu Nhat Tan’s powerful The Song of Napalm in 2012 for our first LA International New Music Festival and follows our work closely (and yes, he’s being played by Ryan Reynolds, People Magazine’s Sexiest Man in the World for 2010, opposite Helen Mirren in The Woman in Gold, a Weinstein Co. production about his Klimt art restitution case for Maria Altmann).

Composer Vu Nhat Tan with E. Randol Schoenberg in May 2012.

The Song Hong players know they have a national responsibility to make the necessary technical musical break through that will allow them to advocate for their musical founding fathers and encourage their own generation on the international stage. The impact of their hearing this in LA was immeasurable.

I like a good story. And this one with the Song Hong Ensemble is a great one. As in the FIRST Vietnamese chamber ensemble to tour internationally. That’s called historic in any book. And composers have to have musicians or the notes will remain just paper on a page.

Being a story under construction there’s a lot more on the way. We’d grabbed their attention with California cooking and they couldn’t wait to get to the Sunday Hollywood Farmers Market.

See you at the yummy Hollywood Farmers Market for my next blog!

It’s a nice Sunday bookend to the 2010 Sunday afternoon at the home of Arnold Schoenberg. I think violinist Phan Thi To Trinh heard what I was saying and acted upon my encouragements. It only takes a person to change the village. Who knew that in less than five years she’d be in my house for dinner with the first chamber ensemble in Vietnam’s history touring to the United States?