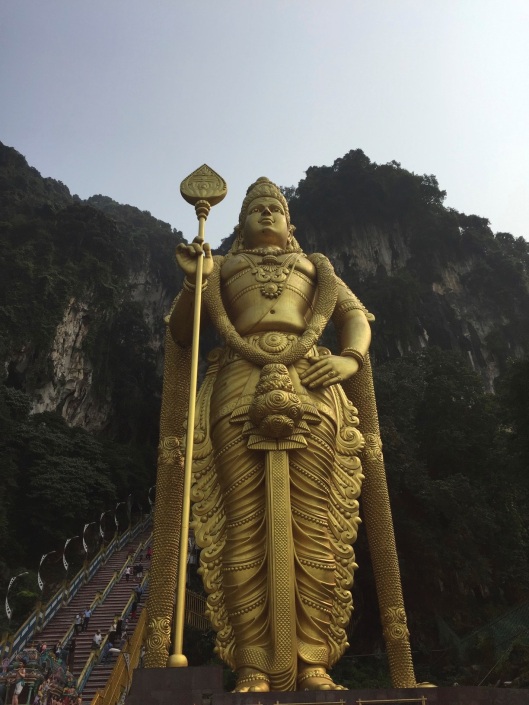 The imposing Lord Murugan at the Batu Caves.

With the inspiration of businessman K. Thamboosamy Pillai, the Batu Caves outside of Kuala Lumpur in Malaysia became identified with Lord Murugan in the early 1890s. Since 1892 the Thaipusam Festival in early January/February is celebrated here with endless throngs of worshippers crowding the 272 steps up to the top of the caves. The imposing statue of Lord Murugan was erected in 2006 and is the largest Hindu shrine outside of India. 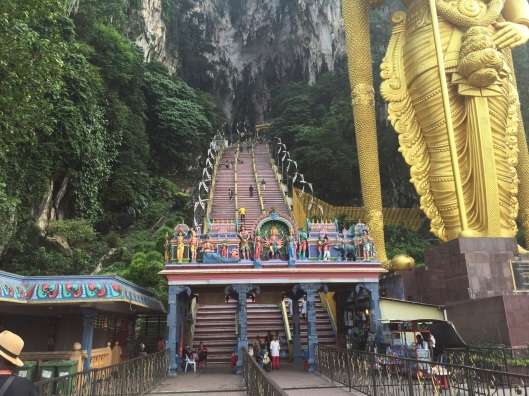 The entrance to the staircase of the Batu Caves.

A word about finding the Batu Caves if you’re one of my many readers checking in on my Malaysian posts. It couldn’t be easier. One simply goes to the main KL Sentral Station in Kuala Lumpur and takes the metro to the Batu Caves, which is the last stop of the line. Going to the caves is a very short walk. And as you might expect from looking at the statue of Lord Murugan, the shrine won’t be hard to find! 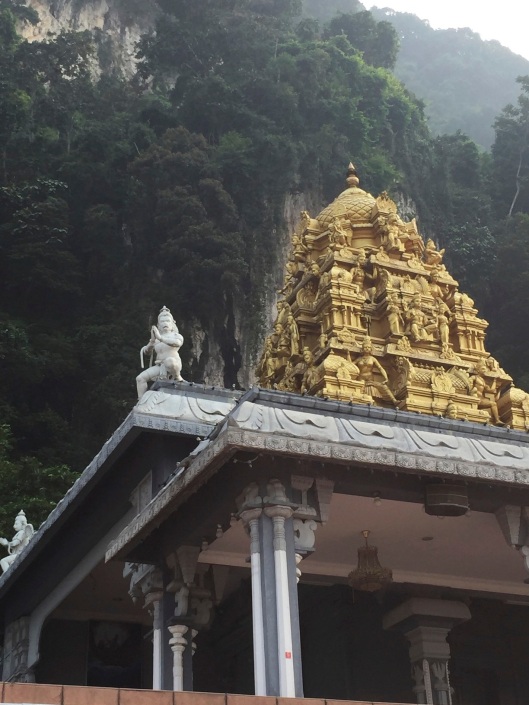 A sub shrine before the staircase is the first landmark you’ll see from the station.

My mom always taught me to do my homework. Before I first went to Southeast Asia to visit Cambodia and Thailand in 2004 I put together a reading list. If I were asked to put my finger on the allure of this part of the world, I might surprise you and say it is not because of the food, the people, the colors, or the tropical weather (which is a bit steamy until you adjust to the schwitz factor helped by cold fresh coconut juice). Before you go, as I discussed at length in my last post, take time to do some imaginative reading.

And as I mentioned in my previous blog, my wife Jan and I were tremendously influenced by our friendship with Jacob and Josephine Zeitlin. Since he was Aldous Huxley’s literary agent, perhaps you can see what’s coming, as everything Vedanta was swirling around Hollywood in their heyday, following in the footsteps of Ramakrishna’s first visit to California in 1899 to South Pasadena. If you practice yoga or eat yogurt, it comes from that 19th century trip to Southern California. You can visit the house where Ramakrishna stayed, on Monterey Road, as it remains a Vedanta Center.

The finest English translation of the Bhagavad Gita is by Christopher Isherwood, the iconic, and first out, author of the gay community. Isherwood was a practicing Hindu and learned Sanskrit (we pass his Vedanta temple regularly every Sunday going to the Hollywood Farmer’s Market, its gold dome still gleams in the sunlight). As a gay man, Isherwood described his guru with loving kindness in a must read book about Los Angeles, My Guru and His Disciple. The forward to my copy of the Bhagavad Gita was written by Isherwood’s fellow expatriate Los Angeles friend, Aldous Huxley, Zeitlin’s client. 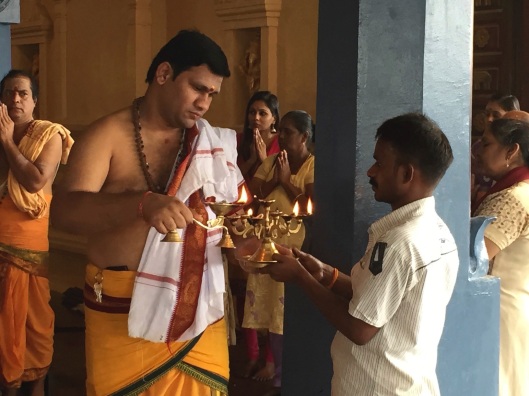 A Hindu puja blessing at the Batu Caves (notice the iPhone poking out of the the priest’s robe).

And so I did a little superficial research and came to understand that before going to Southeast Asia I would benefit by reading the three Bibles of Hinudism: the Mahabharata, humanity’s longest literary work, the Ramayana, our greatest rescue epic, and the Bhagavad Gita, a nocturnal poem of prayer found in the Mahabharata but considered a book on its own. Don’t be impressed! I went to the now sadly vanished Bodhi Tree Bookstore on Melrose Avenue, also located a block down the street from where I grew up in West Hollywood and a good walk from Zeitlin’s own Red Barn store on La Cienega Boulevard. At the Bodhi Tree, amidst the numerous photos of guu’s staring down from the walls,  I found abridged versions by R.K. Narayan of the Mahabharata and Ramayana to augment my copy of Isherwood’s Bhagavad Gita translation. For good measure, I threw in Isherwood’s compelling biography of Ramakrishna.

Because, for me, the genuine allure of Southeast Asia is found in experiencing the cultural meeting of Hinduism, Buddhism and Islam. Theravada Buddhism (think “Th” for Thailand and you can remember the type of Buddhism practiced in Southeast Asia) is omnipresent, but it’s symbolism is bound up with the Hindu epics, which results in very deep waters for the novice swimmer. That’s where I start with introducing Southeast Asia, and then spin off to cuisine, colors, landscape, history. And all this comes together in Malaysia and Singapore. 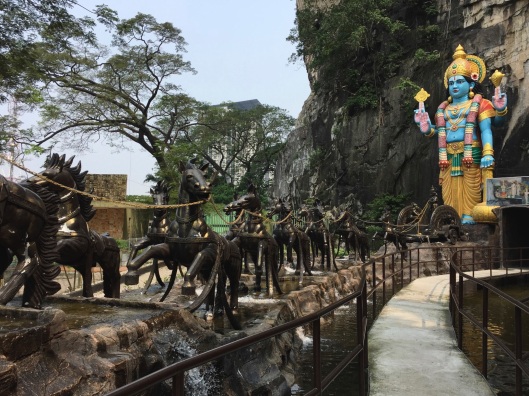 The entrance to the Ramayana Cave at the Batu Cave complex.

Fortified by literary and cultural curiosity, I hope you’re now ready to tackle the 272 steps to the top of the Batu Caves! 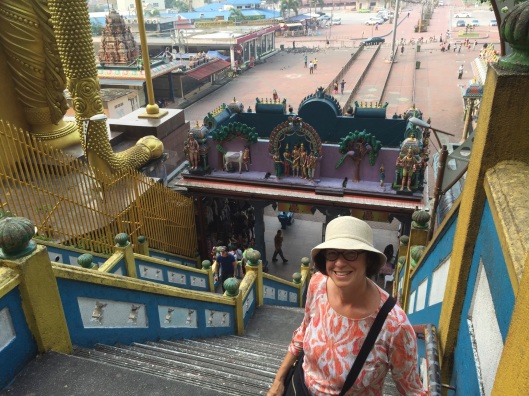 Jan at the beginning of the climb. 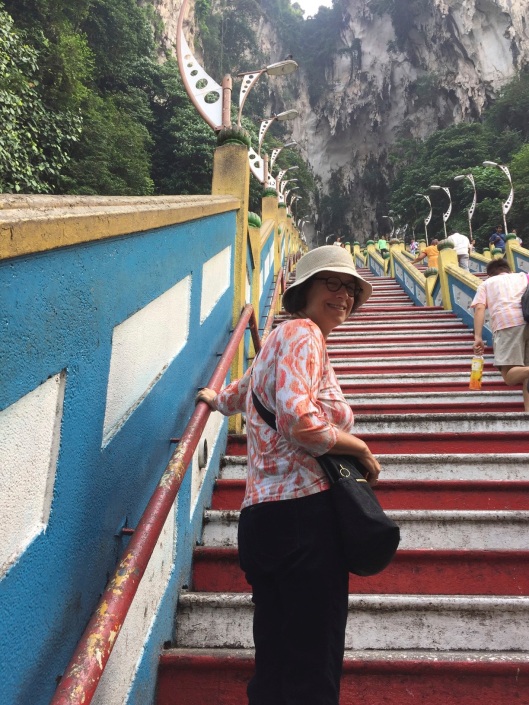 And the steps ahead!

I am entitled to my own personal favorite characters. And I found one, as the story of the Ramayana is, for me, the greatest rescue story on Planet Earth! Of course the legend has a familiar theme (think Helen of Troy in India). The most beautiful princess in the world is abducted by the bad guy and the broken hearted prince must scheme to rescue her. But this familiar back story (doesn’t every culture have one?) enjoys twists that only India’s Ramayana could provide.  I was born in the Lunar Month of the Monkey. When I grow up, I want to be Lord Hanuman!

My Thai friend Sam at the Hollwyood Farmer’s Market agrees. His family has the best satays outside of Southeast Asia, and Sam’s wife and I share the same birthday. And when Sam and I randomly wore the same Hanuman shirt one Sunday morning, we were surprised and happy! My weekly satay orders changed to being the “Hanuman Special.” How to explain this? Got karma? 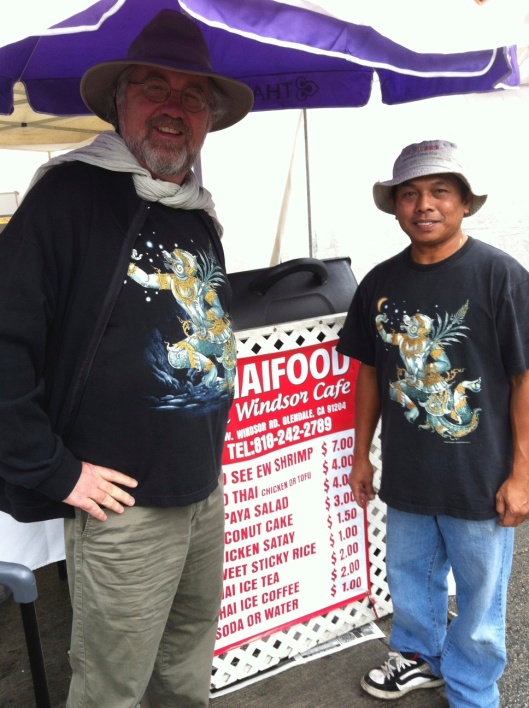 With my Thai food stall friend Sam of Sri Windsor Thai Food at the Hollywood Market, close to Isherwood’s Vedanta Center, as we sport identical shirts of Lord Hanuman!

Our Ramayana princess, Sita, is abducted by an evil Rakshasha to Sri Lanka. Lord Rama and his brother are out of resources to mount a counterattack. Not to worry. As Sita was being borne aloft to Sri Lanka, a veil of hers dropped from the sky, and miraculously fell on the Monkey God, Lord Hanuman, my favorite character. Rama, who by this point has no soldiers, is met by the Monkey God, who promises to attack the Rakshasha’s castle on Sri Lanka with his loyal army of monkeys leaping over the sea from South India to rout the evil doer and free Sita. Who needs an army of human soldiers when you have an army of flying monkeys? And if your army can fly, who needs a bridge or navy to cross the ocean? Lord Hanuman also gets his pals, the bears of the forest, to join the fight. Flying monkeys and bears fighting to save the world from evil? My God do the bad guys in the Ramayana get their asses kicked! That’s good triumphing over evil, Indian style. Problem solved! 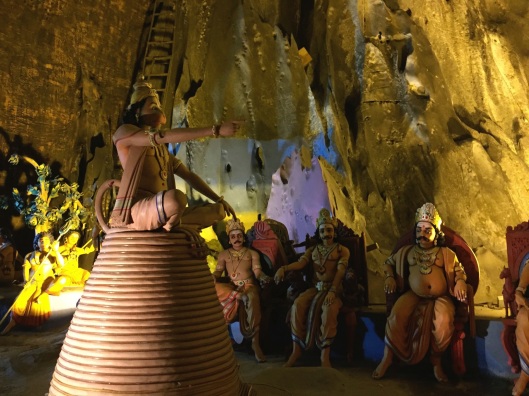 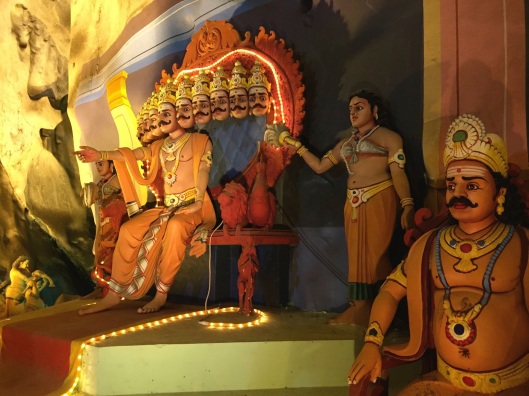 I hope you like monkeys. Because you’ll meet quite a few on the 272 steps climbing up to the Batu Cave entrance! Understanding they represent the greatest hero of all time in the Ramayana is good to know! I would, however, recommend to not feed them (let’s just say they aren’t shy and border on aggressive if food is involved). 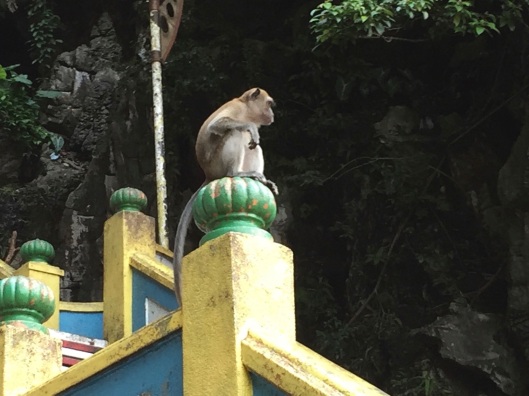 Perhaps a reincarnation of Lord Hanuman? Or just a soldier in the Monkey Army? 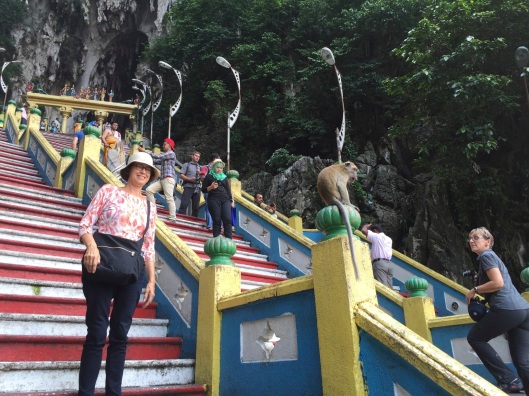 Jan keeps her distance while admiring a Batu Cave monkey.

The ascent is not difficult and if you become tired there are plenty of wide landings to break the climb on your way. But keep going because once you arrive to the top, the Batu Caves are astounding! 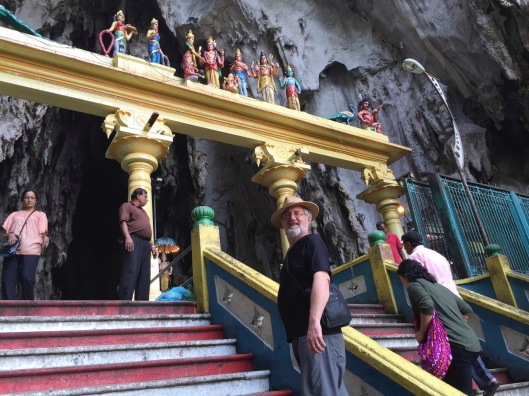 At the top of the staircase. 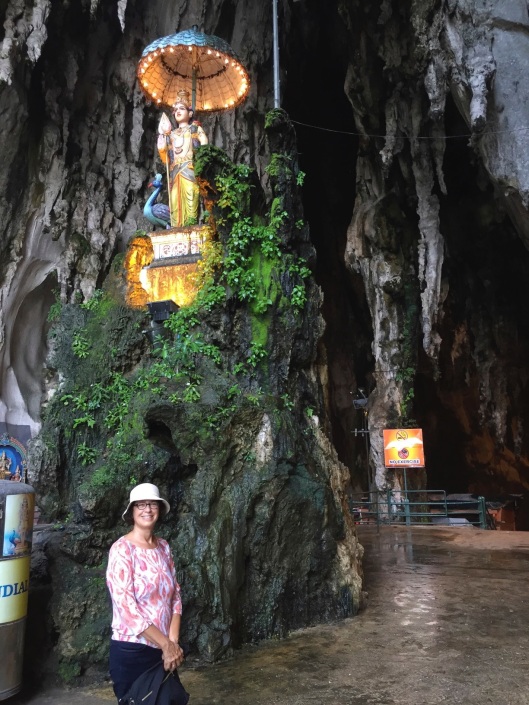 The entrance to the Batu Caves.

You’ve arrived at a limestone cathedral vaulted space. There is a slow drip of dew water coming from above and walk mindfully, as the stone floor is damp and could be slippery if you don’t use caution. The sound of the drip drip dripping water is magical. But I find this type of environment part of the experience. Why rush? As a traveler, you might not go to the Batu Caves everyday of your life, so savor the moments spent there. Light some incense and take in the blessings offered by the numerous shrines. No conversion required. For a few moments, everyone is deemed to be Hindu! 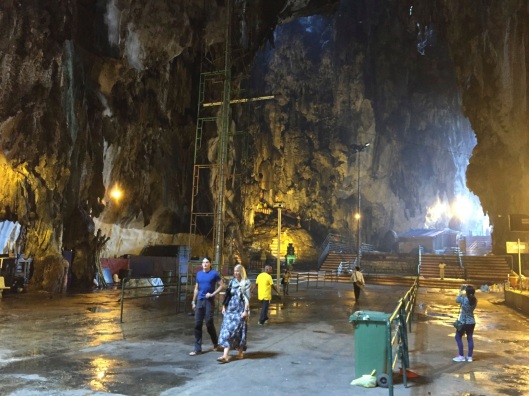 The vast hall of the Batu Caves. 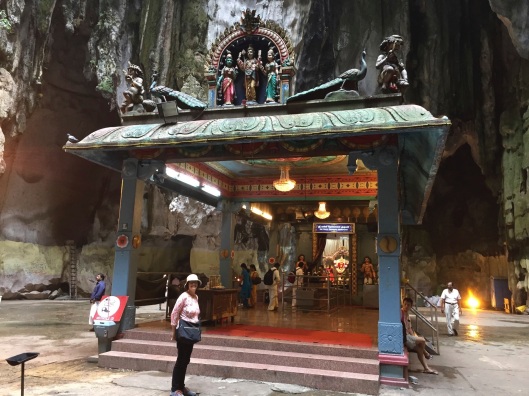 One of the shrines in the cave. 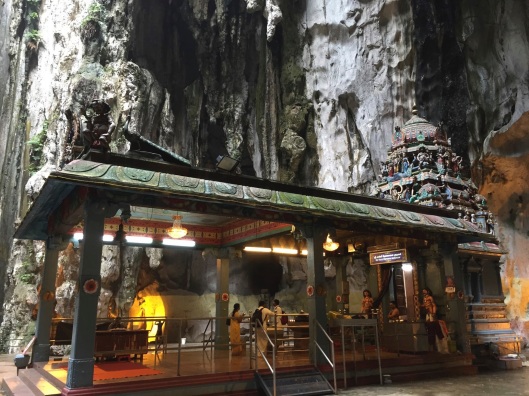 Take off your shoes and receive a memorable puja blessing in the Batu Caves. 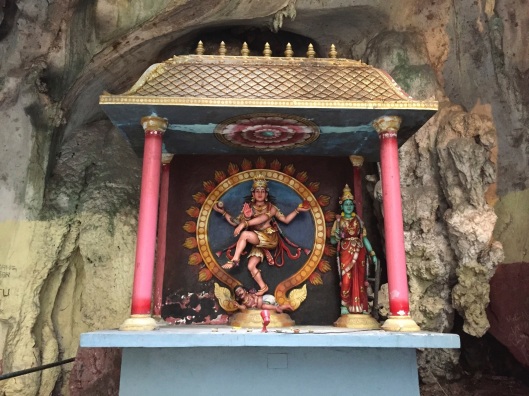 Nataraja, the Lord of the Dance. 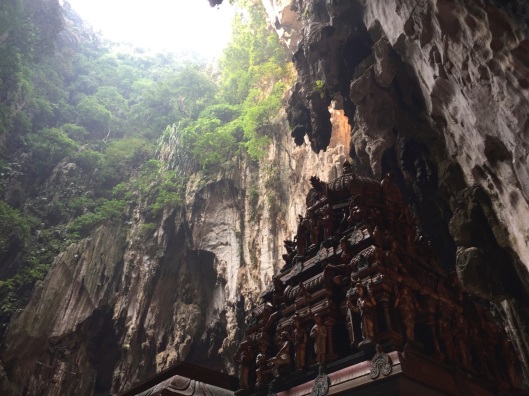 A view of another shrine and limestone rock leading to a natural skylight from above and dripping streams of water.

Here’s my practical travel tip. Go to the Batu Caves early in the morning, a good strategy in tropical heat. Why? Because you can plan to have breakfast at the bottom of the cave entrance, there are plenty of luscious and tasty Indian restaurants waiting for you. Jan and I have yet to go to India, but this entire experience got us ready to make the plunge as soon as possible. The tiffin breakfast was delightful, the ginger cardamom pulled tea the most refreshing of my life. I can’t imagine other tastes after experiencing the climb to the Batu Caves guarded by Lord Murugan, the Commander of the Gods and Victory, the son of Shiva! 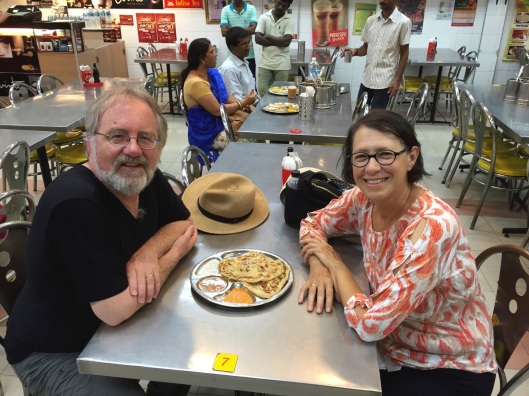 A happy sweat after climbing the stairs (and a little AC is welcome). 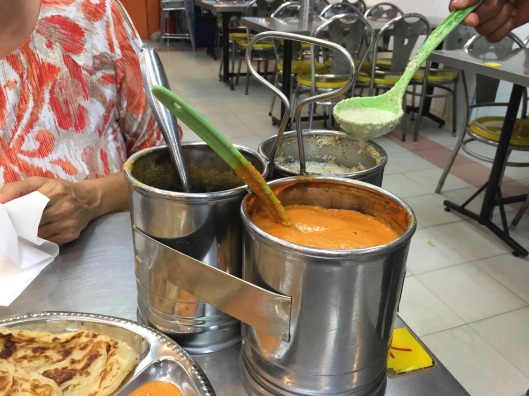 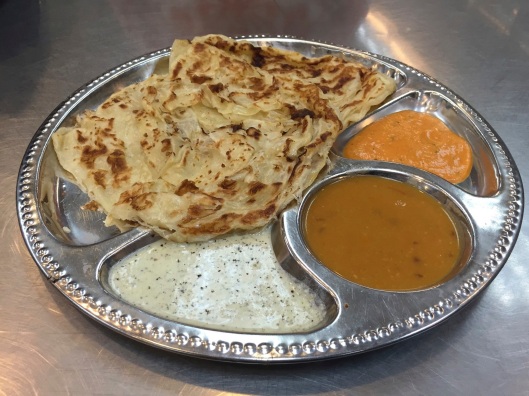 A simple Indian breakfast was memorable.

As we were leaving our morning breakfast, we heard all types of Indian music coming from the temple next to the staircase entrance. Hindu temples are tremendously welcoming to outsiders and so there was no question we could come in and observe a family puja ceremony. As I’ve already pointed out, the priests themselves use their iPhones, so by practicing respect and remaining quiet and asking permission, we took some pictures of a ceremony honoring an anniversary of the departure of a family loved one. But unlike the Abrahmic Faith’s in the West, in Hindusim they’ll return. 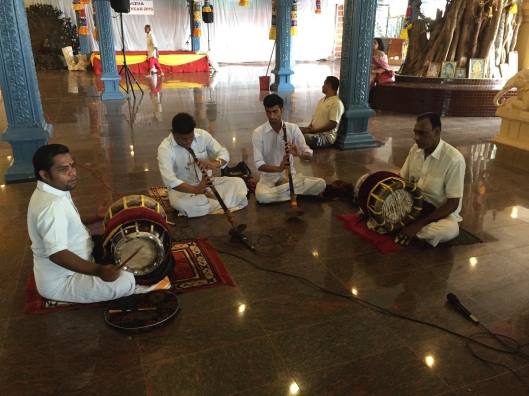 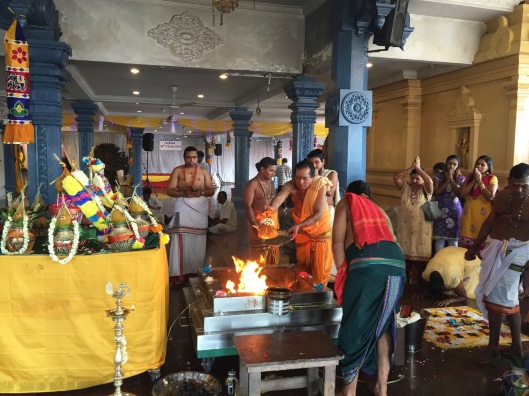 Purifying fire for the puja. 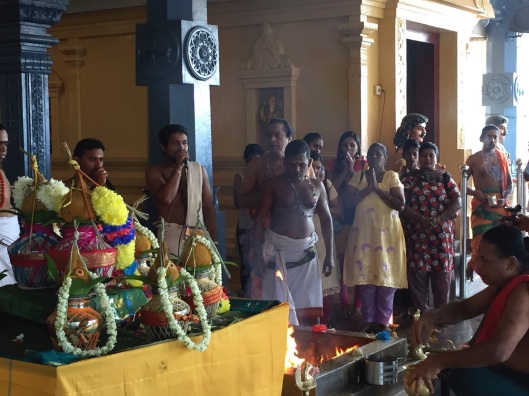 A family in prayer.

British historian Michael Wood, who’s inspiring BBC documentary The Story of India does a tremendous service to us all with its ability to clearly introduce the vast world of India, suggests that India is the one remaining culture that has an unbroken link to antiquity, in particular the South Indian world of Kerala and Tamilnadu. The Abrahamic religions of Judaism, Islam and Christianity have been formed and reformed for centuries. The 20th century turmoils of East Asia, Southeast Asia and Tibet have had serious consequences for Buddhism. Only Indian Hinduism remains connecting us all back to where we’ve come from, according to Wood.

Perhaps we travel to our karma. Maybe karma drives us to make the decisions we make. My Jesuit teachers always encouraged us to embrace any religious belief, as the intents were the same and would not contradict a personal belief. I certainly find India unavoidable. As musicians, India is imposing beyond belief. She exists in my imagination from the literary influences of Huxley and Isherwood, who helped create a vibrant literary community in my home city of Los Angeles. My wife and I were honored to be in the circle of Jacob Zeitlin when we were in our 20s, and this logically meant coming to terms with these British expat authors. They  in turn led us toward both India and, with Huxley, toward the Alexander Technique.

And though we’ve not visited India yet, I know that Singapore and Malaysia have given us a hankering for the real thing one day.