”We are friends! Chúng ta là bạn!” said Thanh Hoài in a stage whisper as we reached out to hold each other’s hand, joining together the entire cast of Kim by Vũ Nhật Tân. Receiving the amazing response from a capacity audience for the collaboration of two of the new outstanding arts organizations in Việt Nam, the Đông Kinh Cở Nhạc/Ancient Ensemble of Tonkin and the Hà Nội New Music Ensemble, was a night to remember for us all.

How successful, you ask? Let me put it this way. My return flight is now booked. After recharging at home in California for the Christmas holiday season, I will return to Hà Nội for more hard work and important next steps in January 2018.

A happy group photo after our dress rehearsal.

The concert was poetically inspired by the title of a string quartet by Tôn Thất Tiết, A Mirror of Memory. I’ve only programmed Vietnamese music in Hà Nội, and that’s intentional. Their composers choose to write for instruments from my Western culture, and that’s where Jan and I enter the picture. Creating generational continuity is a background mission to all our work with the Hà Nội New Music Ensemble.

The middle piece was Miroir, mémoires by a member of the oldest generation, Tôn Thất Tiết. Our personal connection to this work is vivid. Tiết memorably presented the composition to Jan and me at our first meeting in Paris in 2011, after we completed the Ascending Dragon project for Hillary Clinton’s State Department in 2010. Through a good email correspondence, he had asked us to perform a strong representation of his pieces in Hà Nội for our State Department project to hopefully lay down a marker for future development. Miroir, mémoires was intended to open up those continuing paths in Hà Nội, and so finally this dream became a reality. I am sure he was with us in spirit from Paris!

Realizing a dream of Tôn Thất Tiết in Hà Nội with Miroir, mémoires.

And the program finished with the first installment of a full concert work to come, Kim/Metal by Vũ Nhật Tân.

Getting inside the ancient music of Việt Nam in a rehearsal session .

The idea of my friends Vũ Nhật Tân and Đàm Quang Minh is to create a full concert experience based on the Five Elements of Asian philosophy, Metal, Fire, Water, Wood, and Earth. To animate the ancient players, their vocal texts are drawn from a lengthy poem by a current Vietnamese legend, poet Nguyễn Duy. It’s a big undertaking to put modern day Vietnamese poetry inside its ancient musical context. A major statement about climate change and our indifference to this reality is at the heart of Tân and Duy’s work.

The challenge is to confront simultaneously both traditions, of ancient Vietnamese music and modern music. The opening movement begins with a long statement by only the new music ensemble, preparing as it were the revelation of ancient music, but with new texts that are relevant to our world today. Over the course of four more movements to be composed, we’ve already had a great deal of discussion of how to proceed, when to overlay the groups, to isolate them, integrate them and finally how to conclude the experience in a memorable and convincing way.

Ominous metal bell strokes from three sources, a deep Buddhist temple bell, an ancient gong and a modern tamtam, yield to an expressive violin cadenza, and then the entrance of the first voice, associated with the Hà Nội New Music Ensemble. The idea underlines the Vietnamese collective unconscious, that all is family. Tràn Thư Thủy and Phạm Trương Sơn are married, an ideal combination for this critical compositional moment.

Then the first ancient instrument appears, a đàn bầu played by master musician, Xuân Hoạch. As he weaves his ancient spell, Tràn Thư Thủy speaks a poem over the ancient song as our contemporary world slowly disappears. And then finally, Madame Thanh Hoài enters, time traveling us back from the future and into the realm of the ancient, demanding we confront climate change simultaneously through past and future, in the permanent present of music.

I never said Việt Nam was easy to grasp!

From the Hà Nội New Music Ensemble, to the ancient world of……

I felt a genuine connection from the audience at this moment on stage, not the result of blockbuster marketing but of rapt attention. If you know audiences in Việt Nam, you might understand the triumph of pin-drop quiet achieved with over 600 people listening on the edge of their seats.

To prepare this journey required I learn as much as I could about the world of Chèo and Tướng Vietnamese music. Of course, I had the best teachers imaginable, but as Nguyễn Duy’s poem moved through these two different styles of ancient music, the audience was in touch with his contemporary statement. This took considerable rehearsal, one of our sessions together was indeed five hours long. All texts were memorized at our first meeting. Trust me, the Vietnamese are persistent! 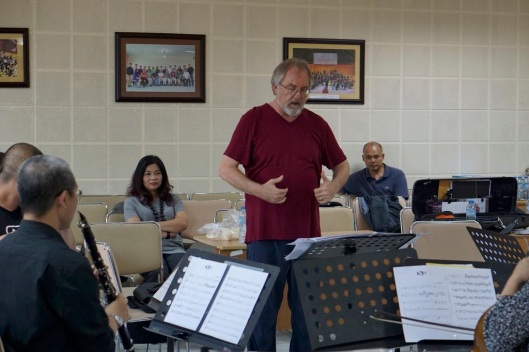 Rehearsing every chord with the Hà Nội New Music Ensemble. 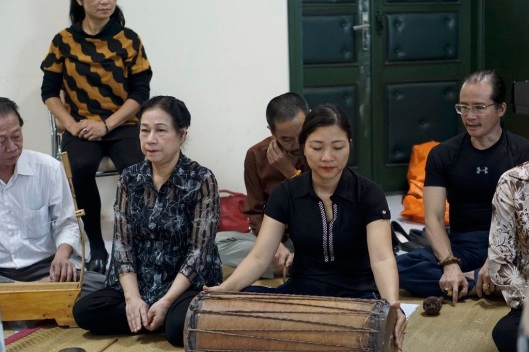 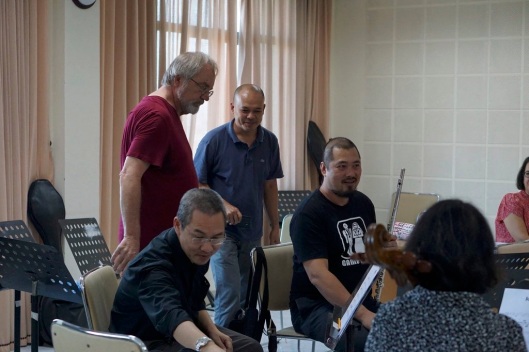 One always wonders about the audience size for a world premiere. How many will show up? What to expect? Will we be successful?

We didn’t need to worry. Our shared strategy, which is deeper than marketing a specific concert, is to address a much larger cultural issue. Namely, what is the simultaneous national identity in Việt Nam for both ancient and new music? I’m in Hà Nội because they choose to compose and perform on instruments from my culture in the West. I’ve learned their culture with humility to understand the context of this project, and I have a long journey still ahead of me.

And the public showed up in force! I’ve never signed so many autographs or taken so many post concert photos with an adoring audience in my entire career! 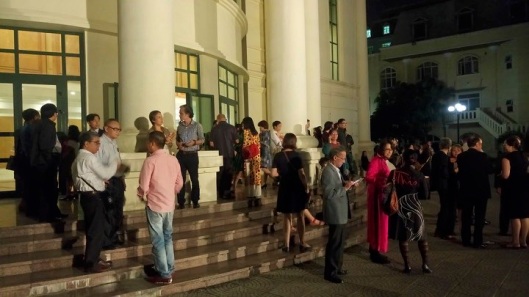 The city of Hà Nội turned out in force for its Hà Nội New Music Ensemble. 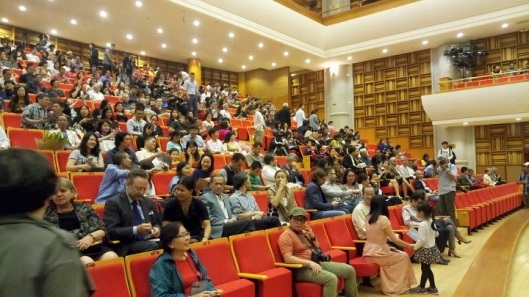 Ready to begin the long journey into the Five Elements.

And how else to do I measure the success of our collaboration? The post concert dinner was beyond fabulous! A great steak house was reserved, with fabulous red wine, Spanish Serrano ham, salads and breads galore. And then when director Đàm Quang Minh brings an expensive 1997 Laubade Bas Armagnac for the reception, you know you’re in good hands and it is time to celebrate almost two months of work together!

How to party in style? With a superb 1997 Bas Laubade French Armagnac! 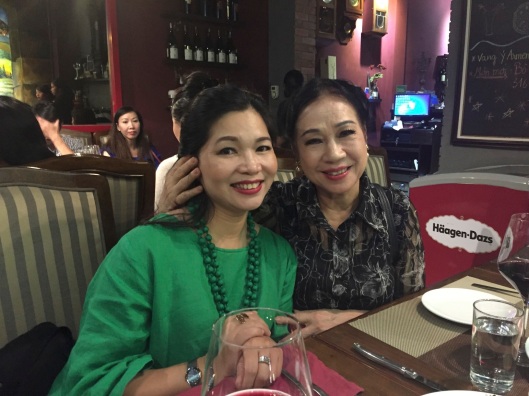 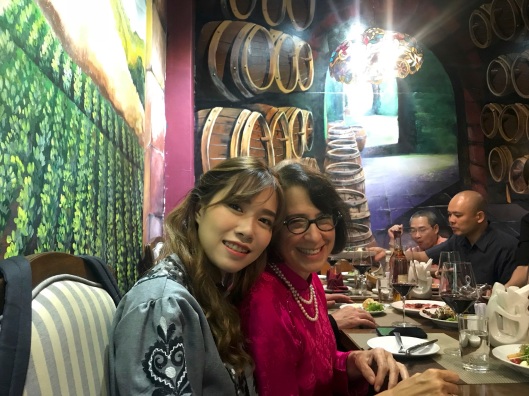 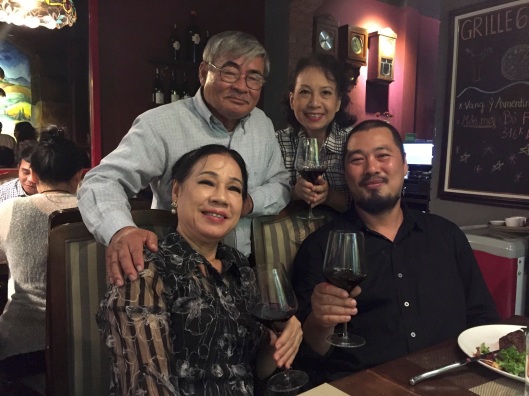 One of two tables celebrating a tremendous concert in Hà Nội.

And so this is a post about our chemistry together, off stage, on stage, in rehearsal and in performance, in planning sessions and website development and all the next steps needed to now capture the amazing energy that the public of Hà Nội gave its new music ensemble. Groups have major years of inflection, and those years are the third and the tenth. As in personal relationships, somethings needs to give, signals need to be clear and everybody needs to feel safe to invest the time and effort to move forward. I’d predicted an Eroica Moment for Việt Nam and its new music group this autumn, and it came true at this concert joining composers, musicians and public together with a major success across three generations.

Joining hands together between Việt Nam and the United States.

”Chúng ta là bạn! We are friends!” is the motto of my friend Madame Thanh Hoài when we greet now each other. She is patient with my slowly improving ability with Vietnamese, for which I am grateful. She’s also fond of saying to my wife Jan that “America and Việt Nam….we are now friends.” Having Madame Thanh Hoài take a leading role in Vũ Nhật Tân’s Kim/Metal is a bit like having Dame Judi Dench be in your movie or play. Her sheer presence speaks volumes to a Vietnamese audience.

You’d book your return flight, too, if you were me.