Our first meeting at Public Coffee in the Neustadt District of Hamburg.

Nothing is random. In June of 2017, on our way to take in the conclusion of the opening season of the Elbphilharmonie in Hamburg with Schoenberg’s Gurrelieder conducted by our friend of over forty years, Kent Nagano, I noticed a Facebook post of a young Vietnamese student who was part of a team contributing a technology component to a Hamburg Staatsoper production of Henry Purcell’s Dido and Æneas.

That got my attention for all types of reasons!

Lương Huệ Trinh in her student years at the Cologne Cathedral.

So I pursued my curiousity, sent her a FB Messenger introduction and sure enough, among her teachers in Hà Nội were my good friends Vũ Nhật Tân and Đàm Quang Minh. How often do you get a chance to meet the next generation of Vietnamese composers in the city where Johannes Brahms was born, György Ligeti was based and Gustav Mahler directed the opera company your best friend is now directing in Schoenberg’s Gurrelieder at the overwhelming new Elbphilharmonie? 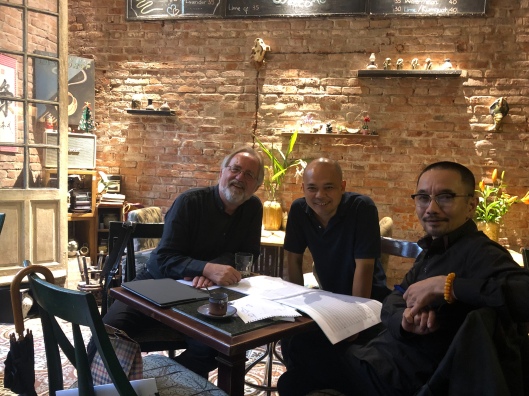 The spectacular Elbphilharmonie in Hamburg. 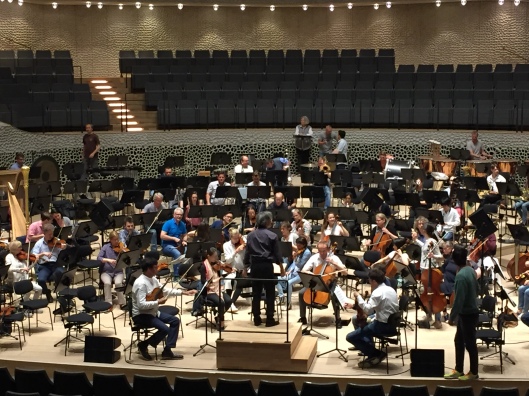 Kent Nagano before a Gurrelieder rehearsal begins at the Elbphilharmonie.

I felt it then and I feel it now. This was the start of something big.

A determining element of my interest in the Hà Nội New Music Ensemble are the three generations of composers forming the backbone of new music in Việt Nam. I’ll soon be discussing specifics of the generation of French-Vietnamese composers Nguyễn Thiện Đạo and Tôn Thất Tiết. They had groundbreaking careers in Paris, Đạo studying with Olivier Messiaen, with both receiving IRCAM/EIC commissions green lighted by Pierre Boulez (indeed Tiết’s commission world premiere was conducted by Kent Nagano, so there’s another family connection, too). The middle generation is represented by Vũ Nhật Tân and Tràn Kim Ngọc. But with a new generation coming up, there was enough compelling continuity for me to truly devote a significant part of my schedule to Hà Nội.

”NOW I know why you go to Việt Nam!” exclaimed American icon, William Kraft this summer after I introduced him to composer Nguyễn Minh Nhật, who finishes his studies at the Manhattan School of Music in New York City this year. I’ve written about Nhật in other posts, and have already performed quite a few of his pieces. Kraft, at a youthful 95, is nobody’s fool about new music, so I was happy that he took Nhật under his wing last summer after one reading of a score, creating an invaluable personal link for a young Vietnamese composer between the world of Igor Stravinsky, the post World War II music of Cage, Boulez, Takemitsu, Harrison, Stockhausen, and the 21st century, creating a bigger perspective for the future of new music in Việt Nam.

And so here is how I measure change. My friends Vũ Nhật Tân and Tràn Kim Ngọc had to wait over a decade for pieces they composed when they studied in Germany to be performed at home by Vietnamese players (both were in Cologne with Stockhausen’s Johannes Fritsch). I know – I’ve conducted those performances. 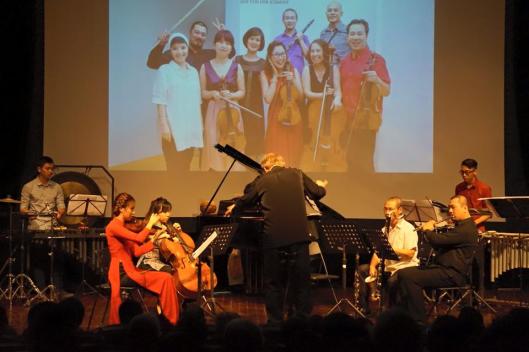 Fast forward to 2019 for contrast and development in Việt Nam. Trinh returns home from Hamburg to the existence now for four years of the Hà Nội New Music Ensemble and a concert jointly sponsored by the Institut Français Hà Nội and the Goethe Institut Hà Nội, titled Vệt/Streaks. Upon her return she will begin teaching electronic music at the Hồ Chí Minh Conservatory in Hồ Chí Minh City with a broad description of genre, jazz/pop/rock/composition, with the long term goal that she will help define an independent department and establish a major in multimedia studies.

Nicholas Isherwood with Trinh in Germany.

And she is able to connect herself. It’s often the case that one benefits from outside confirmation of what is a hunch that there’s talent in a young musician. When I saw that she independently met my good friend, the legendary bass-baritone Nicholas Isherwood, who originated the role of Luzifer for the LICHT cycle of Karlheinz Stockhausen, I was absolutely thrilled. Nicholas and I have corresponded together about our impressions of Trinh, we’ve not yet found the right project to bring us together, but he was able to second my own sense that Trinh is formidable talent. I am certain a new piece for us will find its way onto the drawing board.

Phạm Trà My will be the đàn tranh soloist in Trinh’s JiJi.

“A voice from somewhere or from deep inside my memory. Remember? How do you wanna be loved? How did you love? In a train of time, you’ve lost your sense from the emptiness. Are you afraid? I’m burning inside.”

Trinh’s JiJi is a great inaugural piece for me to begin my association with her music. The above quotation is the first words we hear from her effective video that begins over a blurred harmony. Her background is broad and to me she is still defining herself, which comes with the territory of sorting out the relocation experience of having been in Hamburg for many years and now returning home to Việt Nam. And I am delighted that one of the country’s greatest players, Phạm Trà My, is her soloist here.

Lương Huệ Trinh is from the city of Hải Dương, which is found between Hà Nội and the port city of Hải Phòng on the Gulf of Tonkin and she needs to soon relocate to the south and Hồ Chí Minh City. When she sent me JiJi, I knew here was a piece I would commit to performing, without a doubt. It was fresh. It was bold. It was also Vietnamese.

Trinh is a combinatorial person, and I’ve used a long forgotten analytical world from the Post War era to describe her with intention. But whereas in my generation the term combinatorial was restricted to serial technique, I’ve broadened its definition to absorb the layers and interconnections I observe, and now hear, in her score. What is seamless are the combinations of notes, instruments (Vietnamese and Western), styles, video, and computer electronics. 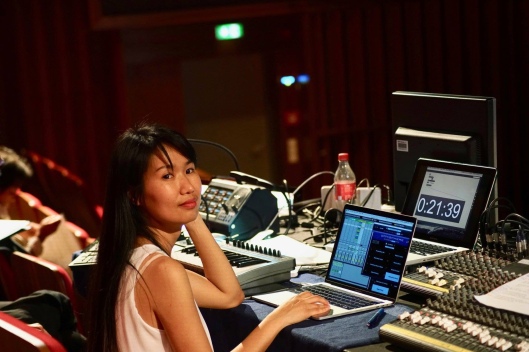 Trinh at the controls in Hamburg.

She’s asking big questions, harnessing the new technological potential of our time with the current of styles and instruments you’d expect from a young Vietnamese composer, and her country’s tumultuous history is well known to her. She’s bringing back tons of ideas from Hamburg and a next generation fluency with the multimedia world that will benefit her country.

Regarding technology,  I’ve joked with her that since I was her age the big difference is that now we assume the technology will function perfectly – compared to the non-digital reel to reel tape machines in the 1970s. If it doesn’t do what I hear I approach the techonology like a note out of tune from a violin, and not a question mark about what plugs in where. What a transformation we’ve seen!

We’re both in serious discussions about a shape defining project, when she is ready, that will build her confidence as an artist – that’s the difficult equation one faces after the school bell rings for the last time, and you transition from teachers to professional musicians with vast experience and many projects on their schedule. That is a challenging party for a young musician to crash – with Trinh I’m happy to help her cause. 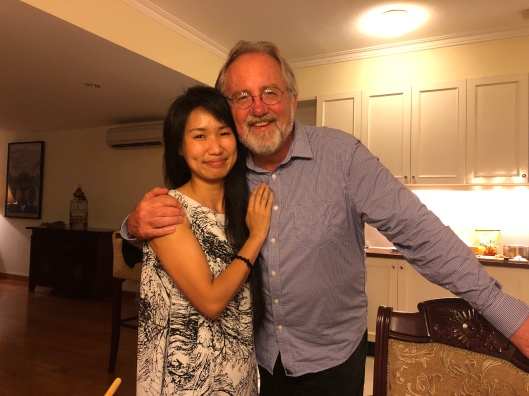 With Trinh here in Hà Nội – and we both are good cooks!

Now, it you dont’ mind, I’ve got a score to study before rehearsal begins next week!

1 thought on “A New Generation: From Hamburg to Hà Nội with Lương Huệ Trinh”