The magical alebrijes workshop of Jacopo Angeles in Oaxaca.

“Jeff, have you read this book The Rest is Noise by Alex Ross that everyone says is so important? Do you know my reaction being from Mexico? Not ONE single composer from all of Latin America is even mentioned. Not one. So I guess we just don’t even EXIST for this powerful gringo critic?”

My friend composer Gabriela Ortiz wasn’t making a point, she was issuing an indictment about a blind and ruthless expression of cultural superiority, her declaration worthy of the El Grito of Padre Hidalgo. But my answer would throw another log on the fire. I delivered my response nonchalantly as we ordered another drink. “That’s not all – no composer from Asia has a defining role in that book either. It’s all about Europe and America, and it’s all about men leading the charge.” 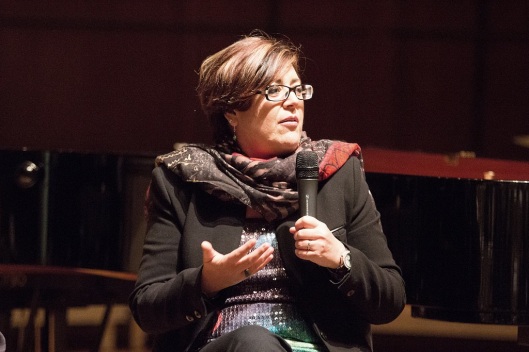 In a nutshell, that’s why I get up in the morning and work on producing the 2015 Los Angeles International New Music Festival. But one festival doesn’t have the ability to implement sweeping changes.

So I won’t try. What I do want to accomplish is to help people question cultural complacency and programmatic routine. And for me the road that I’ve traveled looking for those answers weaves more through Asia and Latin America than the East Coast and Europe. Los Angeles embraces endless resonance for all things Asian or Spanish speaking and remains my touchstone as a gateway city of global influence at the beginning of the 21st century. But you have to travel to be able to come home. 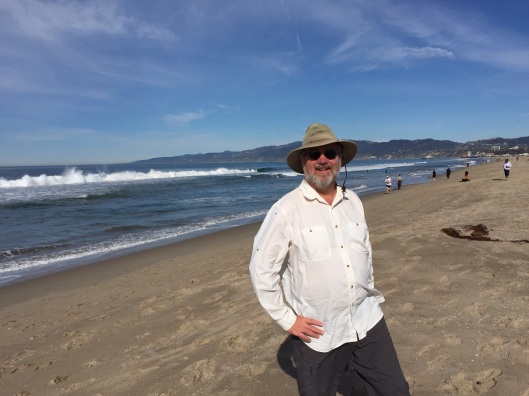 At the End of the Western World at home in Los Angeles.

And so Jan and I are heading to Mexico City in April to put the final touches on our 2015 LA International New Music Festival. I already have numerous blog posts about Mexico, Gabriela Ortiz, Carlos Chavez and Ricardo Gallardo of the Tambuco Ensemble in Mexico City. So if you are new to these posts have some fun searching terms and names for background information.

But we’ve not been to Mexico since 2009, when we toured to Guadalajara for their huge Book Fair. And our last conversation in this wonderful city with Ricardo touched on many new ideas before we departed a few months later for Vietnam and our Ascending Dragon blockbuster project for Hillary Clinton’s State Department. And by the way, we didn’t save our State Department emails either.

Shined shoes are a must in Guadalajara.

In the interim from 2009 Guadalajara to today in 2015, our friends in the Tambuco Percussion Ensemble received the Japan Prize, including an audience with the Emperor of Japan, for their service to the composers of this culturally vibrant country in the Pacific. A major Asian development for them like Ascending Dragon was for us.

At the Imperial Palace in Tokyo, where friend Ricardo Gallardo was received by the Emperor of Japan.

Ricardo, Jan and I reconnected very briefly at the 2010 Latin Grammy Awards in Las Vegas, as we were nominated for our three CD set of the Encounters of William Kraft. He was returning from concerts in Jakarta, Indonesia and flew into Las Vegas the afternoon of the nominees party. Jet lagged and understandably tired, we nevertheless began sketching out large brush strokes of thought calligraphy at Mandalay Bay as we compared notes on our ensembles interaction with Asia, each other, and how Asia impacted us back at home in the Americas.

At the 2010 Latin Grammy Awards with Ricardo Gallardo.

Ricardo and his daughter Elena quickly came through Los Angeles in January (he had a TSA meeting at LAX which needed an in person appointment so the trip was short). She has already ventured into India and Thailand and will be studying international relations. We of course continued our fragmented discussions, begun in Guadalajara in 2009, over a bowl of Vietnamese beef noodle soup of course! 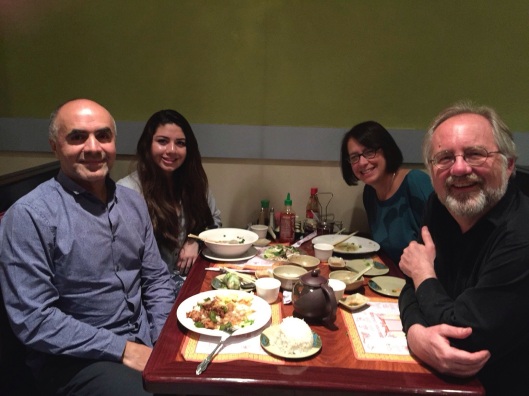 Noodles and a short happy reunion in Pasadena this January.

But these interim visits have not allowed us the time to talk at length, with the leisure, perhaps necessity, of going into the small hours of the night letting ideas ignore the clock on the wall. We want to strengthen the concepts and philosophy that have developed over the last decade, growing out of  the whopping success our recording all the chamber music of Carlos Chavez and the Encounters of William Kraft achieved, adding the parallel successes we have experienced across the Pacific Ocean into the mix. Getting older is fun!

As I’ve oftened said there are just facts, not coincidences. A result of our ensemble’s groundbreaking work in Cambodia and Vietnam, I have been approached to investigate and discuss the concept of a series of comprehensive radio broadcasts with UNAM in Mexico City, surveying our advocacy and performances of the music of Asia, such as Chinary Ung, Him Sophy, Vu Nhat Tan, Nguyen Thien Dao, Ton That Tiet, Pham Minh Than, Unsuk Chin, Hyo-Shin Na, Lei Liang, Joan Huang, Chou Wen Chung, Ichiro Nodaira and others. The idea comes from composer/broadcaster Ana Lara Zavala, who is good friends with Ricardo. He tells me her French husband is a leader of the legendary (as in Xenakis and Boulez premieres) Les Percussion de Strasbourg, so the stereotype of a Mexican musician starts to dislodge itself from assumptions.

And here’s a rhetorical question, a sibling observation to the one at the start of this post: wouldn’t it have been nice if as the director of an American ensemble I’d had this invitation from KUSC in Los Angeles rather than UNAM in Mexico City? Maybe NPR in Washington after a major State Department project in Vietnam? But like the glaring omissions of Alex Ross, there isn’t the interest to look at the world as it is in reality, I’m afraid, when you spend so much energy on the past or on one place. But we will gladly walk through the doors that open easily in Mexico City! 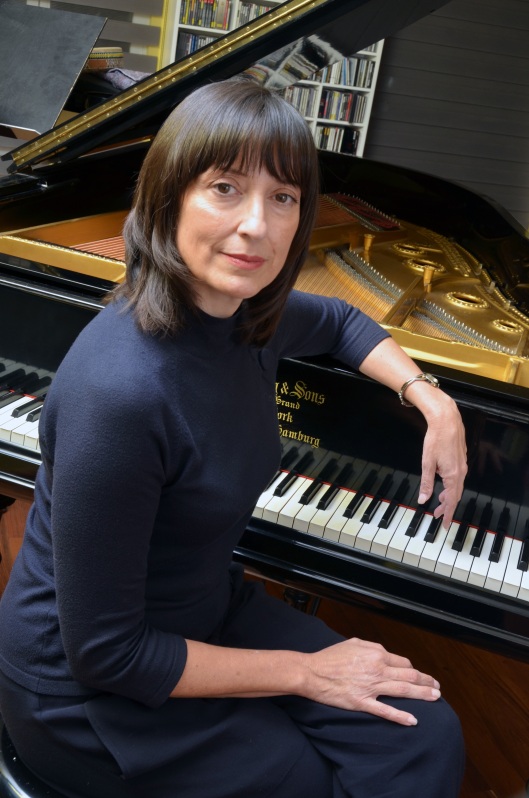 We’ll be meeting with composer/broadcaster Ana Lara Zavala in April.

And last, but certainly not least, we will be putting our heads together during a two week visit with Gabriela Ortiz and her husband, Alejandro Escuer. They have invited Jan and me to be guest lecturers at UNAM, the main university of Mexico and we are excited and honored to accept.

The UNAM Library, a masterpiece of Juan O’Gorman.

Gabriela and I plan to move beyond emails and phone conversations to discuss a major new work, planting seeds for a future festival and exciting collaborations a few years off. The conversations will most assuredly demand an entire full concert work, not the usual transactional commission for 20 minutes, so planning is essential. Since our success recording her CD Aroma Foliado and a 2013 Latin Grammy Nomination for Best Classical Composition for her Elegia, we have talked together about her desire to create a major statement composition and her timing is NOW. No matter how brilliant those 20 minute commissions are, they don’t create the power of an important voice shaping her society through internal vision and conviction.

Because I also believe the time is at hand when women receive not just equal pay but equal respect as cultural leaders so that they become the icons they never saw when they were growing up. And there is no other way to create this new path than to build it yourself. Mozart and Beethoven can’t help you do this, I’m afraid.

So in a few weeks my blogs will be written from Coyoacan in Mexico City, the past district of Frida Kahlo, Diego Rivera, Carlos Chavez, Leon Trotsky (Gabriela lives close to where he met his demise in assassination from the long arms of Stalin) and now the district of friends Ricardo, Gabriela and others. We see our friendships as continuations of our musical and artistic grandparents, composers Carlos Chavez and Aaron Copland or photographers Edward Weston and Manuel Alvarez Bravo. Because culture can often succeed in demonstrating shared interests where business and politics struggle.

The arts and culture, however, need to leave the complacency of searching for enough money to delay old systems from their inevitable collapse. In the U.S. we have developed a cancer in our cultural thinking, and this diagnosis is potentially terminal. For me the malignancy was caused by an addiction to the opium of measurements and outcomes. And like the glaring omissions of Alex Ross blindly demoralizing Latin America and Asia, this numbers addiction only solidifies the American vulnerability that more and bigger solves problems. No matter the author or thinker declaring that the arts cannot be measured, many keep searching for this Fool’s Gold like some mesmerized Spanish conquistador believing in the Seven Cities of Gold or a Fountain of Youth (not exactly the contemporary reality of Florida), wandering like lost foreign interlopers in a New World they find out of their control, vainly searching for an abracadabra of magic numbers which represent to them a piece of the True Cross. Because when you ground your decisions on outcomes and measurements, you have no choice but to default your strategic thinking to marketing and advertising, a sorry masquerade for artistic ideas and cultural vision.

And perhaps that’s why Alex Ross never looked at the map of his own continent.

10 years ago in Coyoacan meeting Tambuco for the first time.

So it’s on to Coyoacan, Mexico City, UNAM, old friends, new connections, amazing food, shots of tequila and mezcal and discussions that will yield one hell of a 2015 Los Angeles International New Music Festival and beyond.  We are not going to Mexico for a few street tacos, that’s for sure, so stay connected. And if you don’t own a map, our concerts will be all you need.