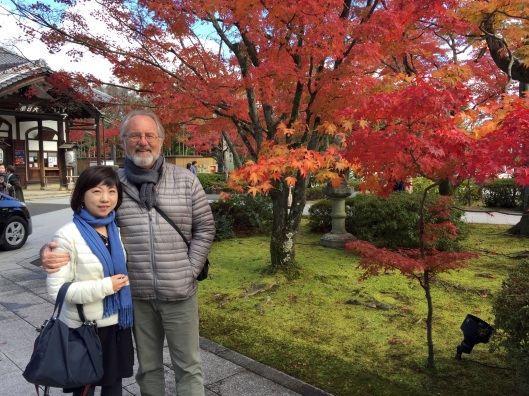 Meeting Maki Takafuji for the first time at Seiryu-den in Kyoto.

The city of Kyoto can be a paradox. The functional train station, workaday streets and boulevards, the normal comings and goings of its citizens, the overall grey quality of most of the recent architecture, all can elicit a potentially ambivalent response. Kyoto is a UNESCO World Heritage City with an extraordinary endowment of timeless shrines, temples, mind boggling handicrafts, legendary ceramics, world class tea and sake production, the legendary home of Noh and Kabuki, and maintains all the splendor of the once ancient capital of Japan. At first appearance, however, these wonders seem very hidden, as if the greatness of Kyoto is itself wrapped in a confusing furoshiki of the modern world.

But whereas the Vatican in Rome is housed in the magisterial architecture of the Renaissance, the sibling city for Buddhism in Kyoto is an ongoing interaction with nature. You will experience more open doors framing a view of nature in a Zen Temple in Kyoto than any Catholic Church in Rome.

Looking west across the Kyoto Basin from the Seiryu-den Observation Deck.

The key that I’ve found to this one of a one cultural city is to literally head to the hills, which means North, East and West, as the southern plain is open territory, defended for centuries by the oldest and largest wooden pagoda in Japan at Toji Temple. The city is in a vast basin (think Los Angeles) and sprawls much more than you’d think, revealing itself slowly after that ambivalent first impression.

This post is a story about seeing Kyoto’s hills from the east and the north, with our newest friend, Maki Takafuji, and our oldest friends, Mitsuyo and Ippei Matsumoto. Imagine Northern California forests with Buddhist shrines and temples and you’ll have a good idea of the environment of culture surrounding this city. The combination of new and old friends helped make Kyoto seem like home, and, with each experience we have in the ancient capital of Japan, its layers reveal themselves with more and more clarity.

So let’s head for the hills! 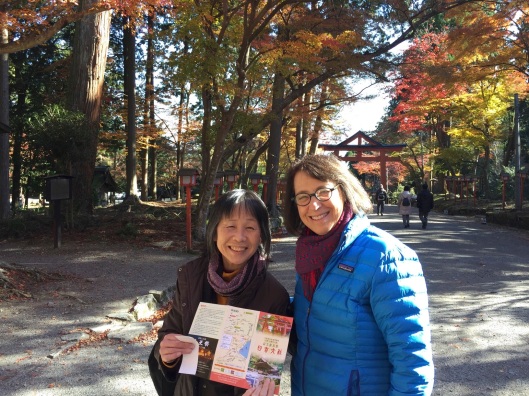 The backdrop of our time in Japan involved long range planning with new and old friends in the new music community of Tokyo and Kyoto. We were discussing how to build bridges between their interests and the Hà Nội New Music Ensemble. And with Maki Takafuji, who we met at the urging of Ricardo Gallardo of the Tambuco Percussion Ensemble, we started at the top. Literally.

“We have a crystal clear morning. Let me take you to the Seiryu-den Observation Deck and Shogun-zuka before we go to Ohara and the Sanzen-in Temple, the home of Buddhist Shomyo singing.“ 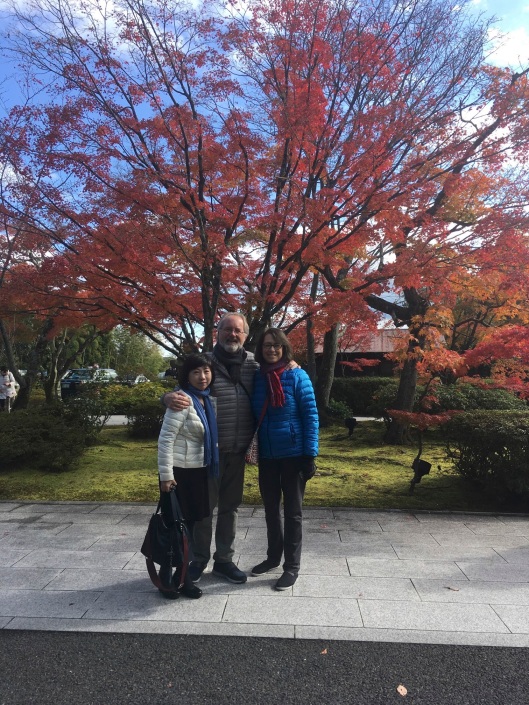 Maki, me and Jan getting started at the Shogun-zuka. 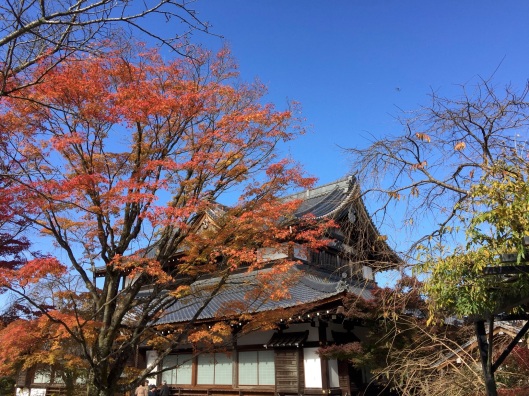 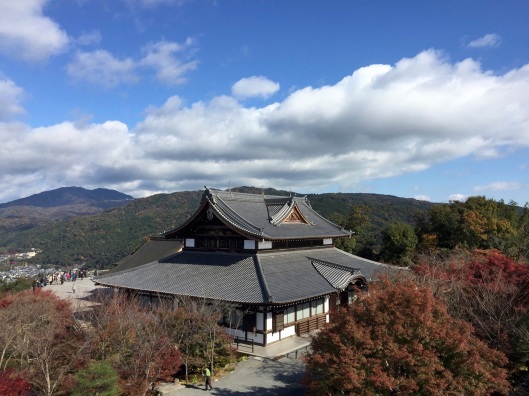 A view from a higher vantage point.

Maki had thought about this tremendous, eye popping first stop for us, an initial memory that predicts a visionary path for all our dream projects for the future. But this was mere prelude to visiting the Sanzen-in Temple in Ohara, the birthplace of Japanese Shomyo Buddhist chanting, a necessary pilgrimage for any serious musician. 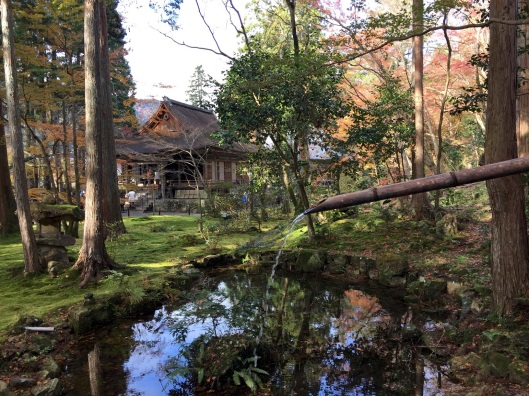 A Shomyo score, to the left of the characters are the inflections and dynamics.

I often lament the lack of imagination characterizing classical music and classical arts, in both the West and the East. The mission of our major arts organizations risk atrophy by singular perspective, institutional imperatives resisting the reflection of the actual world we now share. Someday, and I believe that day is approaching soon, we will collectively admit that most famous Western operas concern central themes about the abuse, madness, murder or suicide of women, one example of many. There is a significant portion of our standard repertoire that might benefit from benign hibernation.

Which brings me to differences between East and West. There is a long historical track record of Western musical culture receiving the privileged position of assumed preeminence. Certainly the educational model found as routine throughout Asia is Western music on its pedestal with ancient Asian music relegated to a separate and often lower stratum. Obviously this topic goes beyond the confines of a blog post, reflected by the searching in my career at this point in time, but the idea I’m making is that the definition of classical needs a new global and institutional definition for our times. We then might achieve shared value systems about the performing arts.

Easier to write the sentence than to achieve the result!

A Japanese St. Cecilia? A Guanyin with Biwa in the forest at Sanzen-in Temple.

The tradition of Shomyo Buddhist chanting originated in Japan at Sanzen-in Temple, according to the Temple’s historical records. The cultures of the East and the West are deep into the process of learning from each other, now in ways undreamt of even thirty years ago. What an inspiring backdrop as Jan, Maki and I got to know each other and discussed ideas bringing the new music communities of Japan and Việt Nam closer together in the coming years. As you can see by the above photo, a musical guardian is placed directly in the forest for contemplation about our relationship between sound and nature.

And a Fun Fact about the publications of scores in the 15th century. According to Shomyo artist Kojun Arai, the first book of Shomyo notation was published in 1472, one year before the first known publication of Gregorian chants in the West in 1473!

A more elaborate Shomyo score, with inflections on either side of the characters.

The origin point of Japanese Buddhist chanting is this temple at Sanzen-in. 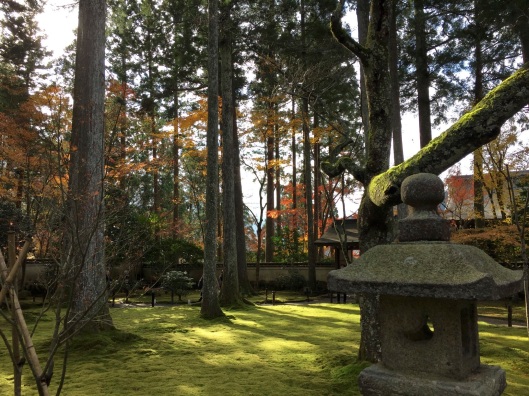 Tall Kitayama pines with autumn foliage and a moss carpet.

Sanzen-in is bordered by two rivers on either side. 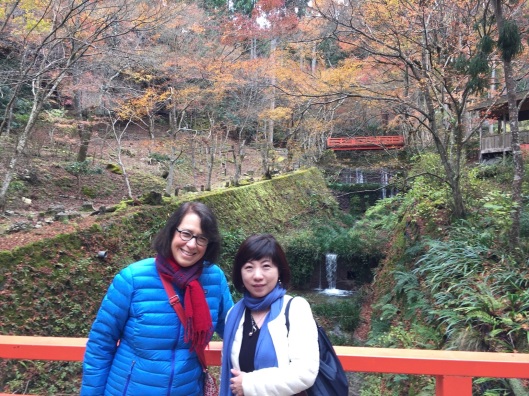 A happy interlude for Jan and Maki together on a Shinto bridge.

The monks often walk directly into the forest and chant the sutras into the trees, the waterfalls, the rivers and gullies. Unlike the resonance of Western Romanesque churches and cathedrals, nature is the acoustical backdrop of faith at Sanzen-in. We have much to learn from this collective wisdom found uniquely in Japan. Buddhism dominates East and Southeast Asia, but in Japan the key distinction is that Shintoism, the religious worship of nature, is always present in any Buddhist temple, as the two successfully coexist. There is truly only one Japan!

And how did Sanzen-in Temple become the center of this august musical tradition?

The answer is found even higher up the mountain, at Enrakuji Temple, the sprawling complex that is the home of Walking Meditation on Mt. Hiei. The founding monks of these temples had studied at Mount Wu Tai in China, and brought the Shomyo tradition they learned in China to Kyoto. The location of Sanzen-in, below the impressive location of Enrakuji, became the ideal location, as two rivers in Ohara mirrored the physical location of Mount Wu Tai in China, where these monks had studied.

Now it is time for us to say goodbye to Maki and hello to Mitsuyo Matsumoto, who would take us a few days later to Enrakuji for a cold walk, complete with the first snow flurry of the season!

The Main Hall of Enrakuji.

Jan and Mitsuyo at Enrakuji in a freezing wind. 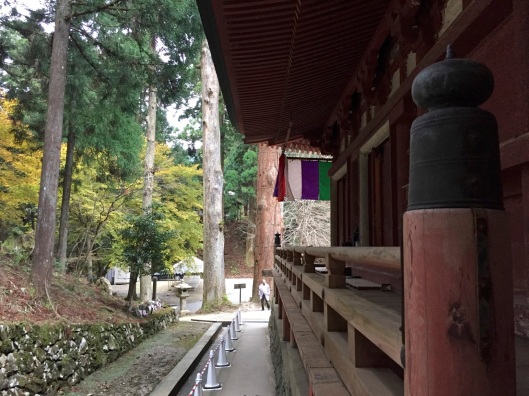 Exit path from the Main Hall.

The soon to arrive snow flurry brought wind that was already freezing cold, our bodies chilled to the bone. The weather made no difference, off go your shoes to respect the sacred space of the Main Hall. But this particular moment was rare, as the Main Hall is opened only every thirty years, and Mitsuyo and her husband Ippei were aware of this auspicious opportunity for us to experience. The Japanese do not allow photos in these sacred places, which I truly observe, maintaining the evanescence of the moment. Not only that, you must be purified by a monk with holy water and a short invocation before going into the Main Hall.

What I experienced was out of body, and I’ll hope to describe this moment with vivid recollection for you.

There was authentic antiquity in the air, in the altars and Buddhas and guardians, the candlelit statues illuminated with no electricity, the centuries of incense within a cedar forest remaining now indelibly present in my memory as it was in my breathing at the time. But it was the “woodness” of the experience, the smell, the tolling prayer bells from the outside temple complex, the ancient carvings of statues, the integration of the architectural design with nature, a far different sacred experience than any house of worship in the West I’d observed, all this stirred me deeply.

Now, in my memory of this moment, I realize I wouldn’t have wanted a warmer more convenient weather, for the impending snow flurry made me acutely aware of the transitory nature of life, that we are here, that we are gone, that all things are ineffable and changing. That permanence is a mirage of wishful thinking and that genuine beauty is of the moment.

A Buddha in the forest at Enrakuji.

And so perhaps it was not random at all that Jan and I would experience these sites with both our newest and our oldest friends, separated by only two days and a few kilometers during the Thanksgiving Holiday. From the hope of artistic dreams with Maki Takafuji to the celebration of forty years of friendship with Mitsuyo Matsumoto, the principal behind both experiences was to share the impermanence of nature at a specific moment, whether sunny or cloudy, windy or tranquil, with a joy of discovery that reflected the conjunction of new and old. In other words, to see Kyoto as the Japanese see Kyoto.

Billowing pennants in a freezing late autumn wind at Enrakuji.

The experience that Japanese music is bound up with nature, in a natural setting renowned for the resonance of forest and rocks and streams, makes me return often to the radiant beauty of a Guanyin in the Forest holding her Biwa. The sun, only for a brief moment, burst through the cloud cover, allowing me a photo that was less than a minute of sunshine.

Only a minute of autumn light.

I urge everyone to intensify their curiosity. In a few days, I learned about an ancient tradition of Buddhist chanting of which I had known nothing before, and went to the location that originated the tradition of Walking Meditation, something I do almost daily in my neighborhood or garden. My hope is that you won’t take sixty-two years like I did to learn of the traditions of musical culture in Japan.

And therein, for me, lies a healthier definition of classical music, knowing that Shomyo in Kyoto is contemporaneous with the beloved Gregorian chants that would shape my mother’s youth in Minnesota at St. John’s Wood.

Which was, for my mom, also a walk in the forest.

Toru Takemitsu, a few weeks before he passed away of cancer, sent postcards to his best friends with the message “I would like to return as a whale, swimming in an ocean than knows no East and no West.”