I love studying scores early in the morning. Maybe it’s because I was born around 8:20 A.M. – some say that’s a good indication of a morning person. Those early hours are undistracted and quiet for learning chords, orchestration, voicings, tempi, interpretation, making all the new details familiar like old friends.

My rule of thumb is to go to sleep each night truly putting the day’s work away. If I can remember everything clearly when I wake up the next morning, I’ve learned just a bit more for the coming performances and then know what to repeat and when to move forward. That makes the next early morning so important for my work habit. And I knew today I’m ready for our LA International New Music Festival starting at REDCAT next week on Tuesday July 7 at 8:30 P.M., with a pre-concert talk at 8 P.M.

Because this morning I got a visitor telling me that just the right energy is coming out of my study!

A black cat staring at me today while I study “The Raven” by Hosokawa.

I always reach a moment in studying a new score where everything comes togther, where the newness fades and familiarity takes over, in an encouraging way. However today was exceptional. As I was going over the portions of Toshio Hosokawa’s The Raven that depict the ebony bird landing on a staute of Pallas Athena in Poe’s cold December room, I looked up. Maybe it wasn’t a black crow (of whch we have quite a few here in Pasadena) but it was a black cat. And a spitting image of the cat I had as  teenager.

A sign? A ghost from a past pet? A message from Poe? Hosokawa from Japan? I don’t know, but I believe in facts and not coincidences, so I took a photo just to know I wasn’t hallucinating after reading a lot of Edgar Allan Poe and learning Hosokawa’s music!

Laura Mercado-Wright is “The Raven” with me on Friday July 9.

Edgar Allan Poe and Toshio Hosokawa aren’t the only artists reaching for the beyond. Got Mayan Cosmology? Gabriela Ortiz does on Wednesday July 8! 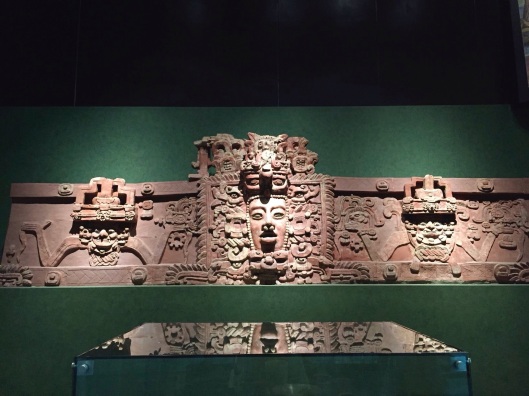 The programs Ricardo Gallardo and I have concocted will take you to places you’ve never been – really, you’ve heard a lot of music from Costa Rica, Uruguay, Colombia, Brazil, Vietnam, Japan, Argentina, Cuba recently? These new faces and sounds from around the globe can take you to the unexpected, perhaps that Mayan wall above or into a Japanese world that for all its “salary man” efficiency acknowledges deep connections to the past.

A Matsuri Festival in Tokyo goes back to an ancient time.

So from the Mayan world of Gabriela Ortiz to the Noh inspired version of Edgar Allan Poe by Toshio Hosokawa, with gongs and rattles and chimes and drums galore with our two Tambuco concerts July 7 and July 14, prepare to move out of new music complacency with where your music comes from.

And talking about reaching for the beyond, the last works of Elliott Carter are not to be missed. Working on them is a joy, and all the details are fast becoming old friends.  We’ve all never been here – a concert of premieres written between 100 and 103.  Final thoughts puts it mildly. Be there Wednesday July 15!

So make your plans to come to REDCAT for our five concerts between July 7 and July 15, all of them important and not to be missed. Each evening will begin with a pre-concert talk at 8 P.M. which we hope you’ll enjoy.

Join Ricardo and me at REDCAT at 8 P.M. for a pre-concert talk July 7. In this photo we’re on the road to Veracruz this April.

For your convenience, here’a the list of complete programs:

Concerts are at 8:30 PM with pre-concert talks at 8 PM. Tickets may be purchased at the REDCAT box office, by phone at 213.237.2800 or online at redcat.org. For more information and detailed program information, visit http://www.swmusic.org

See you all at REDCAT starting Tuesday July 7! Have a wonderful July 4th weekend!