Elliott Carter at work in his Greenwich Village apartment on W. 12th Street.

Around 2:30 P.M. on the afternoon of June 7th, 2012 my wife Jan and I arrived at Elliott Carter’s apartment for what was to be our last meeting together.  With Jan’s family in Brooklyn and New Jersey, we’d drop in on Elliott every opportunity we could and have luckily lost count just how many times we’d visited.  As Elliott entered his late 90s, each meeting became a special occasion. He was 103 that final late spring day.

The days of lunches prepared by his wife Helen were long gone by that point, but we still remember her simple New England tomato soup, and often quietly wear the scarf she gave Jan or the tie she gave me. And Carter was not far, about a block down and over, from the apartment of Charles Ives, which we’d sometimes go and see after visiting with Carter. 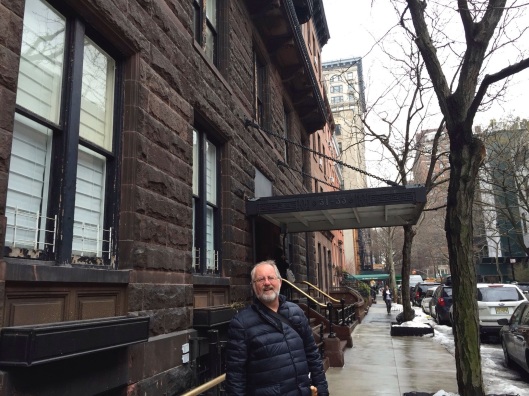 As I’m preparing for an all Carter program at REDCAT in Walt Disney Concert Hall on July 15 that will close my Los Angeles International New Music Festival, I’ve been thinking back to all those Greenwich Village conversations over the years. We are giving the West Coast premieres of A Sunbeam’s Architecture, The American Sublime and What Are Years, the first professional performance in Los Angeles of the 6 percussion work Tintinnabulation with the Tambuco Ensemble of Mexico City and are returning to On Conversing With Paradise, which I conducted in its Asian and U.S. premieres in 2010 in Hanoi and Los Angeles. Our soloists are soprano Elissa Johnston, tenor Jon Lee Keenan and baritone Abdiel Gonzalez.

Carter’s longevity is in and of itself remarkable. He composed at least 60 works after reaching the age of 90. He’d impart his accumulated wisdom everytime we’d meet, and we made sure to think about the questions we’d ask to engage him. A passionate Roosevelt era Democrat, he passed away the day before Obama’s reelection. I don’t think he could have survived a Republican victory after 9/11 and the Iraq War.

Multiple greetings from the First Family on Carter’s work desk.

“In my music, the little voice always wins out.”

One story about Carter’s way of thinking might prove useful. He said to me that, as a composer, he’d often consider the great difficulties of musicians physically getting to any rehearsal or performance, that  all the players, either in a chamber group or symphony orchestra, had independent lives and personalities. Ultimately any rehearsal even starting was a challenge when you consider the various timetables of subway, freeway, buses, metros or taxis players needed to take to get to a specified location. Ultimately, music of their time would need to reflect their given environment. No wonder a young critic at the New York Times recently referred to Carter as predicting the multi-tasking world of today. 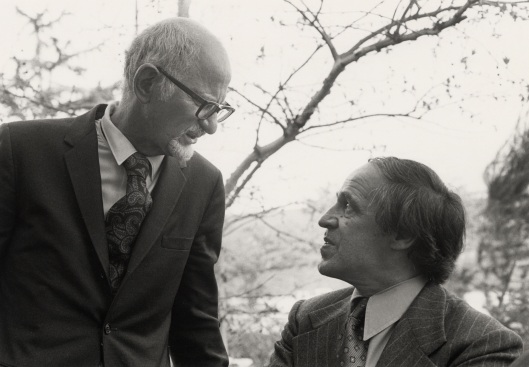 My teacher, Leonard Stein, with Pierre Boulez at the Schoenberg Institute opening.

I had organized performances of Schoenberg’s Wind Quintet, Op. 26 for the opening ceremonies of the short lived Arnold Schoenberg Institute at USC, and remember well being on the staircase when the above photo was taken. I bring this up because of my first experience of Carter’s music. I had no idea who he was or had heard his music, and only had seen an article about the man who wrote impossibly difficult music to play. But he was on Boulez’s schedule both here and in New York (Boulez was working on Carter’s Symphony of Three Orchestras at the time of the photo above).

Boulez had come to Los Angeles to conduct the Los Angles Philarmonic in Carter’s Concerto for Orchestra, and one member of the orchestra I knew correctly predicted that a certain Beethoven symphony tempo during two weeks with Boulez would be as fast as hell to make them feel like they weren’t the New York Philharmonic. In other words, the Los Angeles players were ready for Boulez.

In those days student tickets often landed one in the front row, directly behind the conductor. So Carter’s huge piece simply blew over the top of our heads!

The next day, I was reflecting on the music’s impact. It was a blustery Santa Ana wind season, and I laid down on the ground after lunch with huge almost frightening gusts blowing everywhere. I felt this was exactly the world of Carter’s music I’d heard the night before, huge winds blowing beyond the control of any human. I then reached for a program note (this is back in the non-information age) and sure enough, Carter’s music was inspired by a poem called Vents (or Winds) by St. John Perse.

“There were very great winds over all the faces of the earth.”

I was dumbstruck reading that first line of poetry inspiring Carter’s music. One of the best things I learned from Leonard Stein, a legendary pupil of Arnold Schoenberg, was never read a program note before hearing a piece for the first time. Consult those things after your first experience. See if your perception matches the music.  The Vietnam War, the Civil Rights Movement, a growing awareness of environmentalism, all of these things were shaping my world and my ideas, and for me, Carter had expressed them in his Concerto. It wasn’t just Bob Dylan blowin’ in the wind, and Phil Lesh of the Grateful Dead would later fund a CD of the work conducted by my friend Oliver Knussen. I was hooked on Elliott Carter that afternoon. 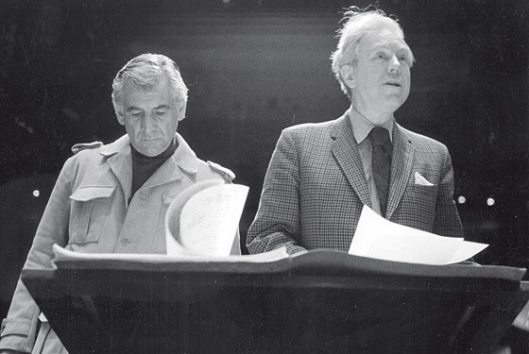 Leonard Bernstein commissioned Carter’s Concerto for Orchestra for the 125th anniversary of the New York Philharmonic, as well as Berio’s Sinfonia, two works now looming as epochal for the 1960s era. Bernstein was writing his Mass for the opening of the Kennedy Center during the same period. Carter admitted to me that Bernstein gave him the most passionate and dedicated performance of his career, and though happy the difficulties receded with Pierre Boulez and Oliver Knussen taking on the piece, he had lifelong admiration for Bernstein’s achievement.

“20 Miles of Books” at Strand Books on E. 12th, a short walk from Carter’s apartment.

Carter left us with a treasure trove of musical wisdom. Our culture has never been here before, considering important music from a centenarian! My July 15th concert is a first time “100 Club Composer” event: I wanted all the pieces to be composed by Elliott from the age of 100. In his last years, he set many poets he knew to music, and for our concert pick up the poems of E.E. Cummings, Marianne Moore, Wallace Stevens and Ezra Pound. It’s easy to imagine Elliott taking a walk and browsing the shelves.

In these last works he summed up his close relationships with many important performers. The dedicatees of the concert include Daniel Barenboim, Pierre Laurent Aimard, Oliver Knussen and James Levine.  In addtion Pierre Boulez conducted What Are Years for its world premiere at Aldeburgh.

And even for Carter fans there are surprises in store. The songs deal with love, joy, paradise, eternity, wisdom in unexpected and direct ways. I’ve never subscribed to the notion that Carter is first and foremost The Complexity King. My own experience with his Concerto for Orchestra runs counter to any sense of technical considerations impressing me. My reaction was based in nature, in my experience as wind as a metaphor for change and his music. From my first encounter I felt, in my heart and soul, that the meaning of his music, confirmed by the startling reality of his poetic inspiration, was dramatic and expressive. And this still rings true.

There is a marked simplification of style in these last songs. That’s not unusual for any composer, and late Beethoven often comes to my mind when I pull back from studying late Carter.  The chord spacings? Vast and deep, like eternity might be. I hope to see you at the concert!

On Conversing With Paradise: working with Elliott in January 2010.

A career in the performing arts presents challenges, as do all professions. There’s a lot to absorb to prepare a performance for an audience! To help create a background of calm awareness, I have studied the Alexander Technique for the last 30 years. One thing I’ve learned from this important and helpful discipline is that we have our priorities very, very out of balance. Be it teachers, journalists, scholars, critics, composers, musicians, most all believe in the study of theory and practice.

The concept of theory and practice is, for me, what has landed our musical culture into a great amount of misunderstanding. Great music, great art, and great literature, all take time for understanding. As we leave the chaotic 20th century, the 21st moves forward with a lot of its own conflict.  We might want to reverse our priorities.

Grounded by the Alexander Technique, I believe in practice and theory, not theory and practice.

To create theory prematurely is to miss the boat, and this extends to the comprehension of any new style or creative language, Minimal or Modernist. For me, theorizing becomes a cancer killing new music. We have much more time to arrive at theory than we think, and if there is a trap in academia, it’s a need to theorize about music in all types of ways. What we need, it seems to me, is to simply practice, practice, practice, which leads to learning and love (and also to Carnegie Hall). I fell in love with Carter because of nature, in the form of a blustering wind storm that long ago day.

With Elliott in Los Angeles at the Getty Center in the early 1990s, photo by Betty Freeman.

But as my mind recalls that last June meeting in Greenwich Village I remember our conversations roaming around Neo-classicism and his thoughts on Stravinsky and Schoenberg (he felt it was a shame so many of Schoenberg’s pieces weren’t played more often), the need of composers to consider performers in their composing process, or our mutual friends in the Nieuw Ensemble in Amsterdam. When it came time to go we said goodbye reluctantly as one can imagine with a 103 influential friend. Elliott assured us he’d enjoy the chocolate babka we’d brought him from Russ and Daughter’s. But his final words to us still ring in my ears.

“Thank you both for all the hard work you do putting on concerts, and I promise I’ll keep composing everyday!”

Achieving 60 compositions between the ages of 90 and 103, Carter’s longevity confounds neat and tidy historical periods. And by simply composing everyday, we have an inspiring body of music that rewards our concern and attention, guiding us as we move forward.

See you July 15 at REDCAT in Walt Disney Concert Halll for the late works of Elliott Carter!