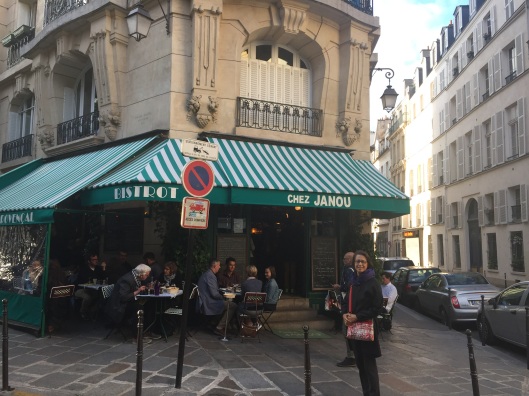 Invariably, when one searches the internet for restaurant reviews of places to go in Paris, the general observation includes a few “rude service” comments. Personally, I’ve never experienced what they’re talking about, but that might be because I have a decent amount of French. I’ve always found Parisians pretty easy going if you just say “Bonjour” when you walk into a restaurant or a shop. You aren’t the first tourist they’ve ever seen. Smiles always help you.

Jan and I are in Europe for planning meetings for next steps for our Hà Nội New Music Ensemble in Việt Nam. Things are moving forward, for while we’re in Europe, my Vietnamese colleagues have concerts in Hà Nội with the directors of the Münchner Biennale and then tour to the Guangxi Festival in Nanning, China. By dividing our resources we’re getting ready for an ambitious future.

Allow me to share with you where a Parisian friend recommended we meet for dinner? And the staff is friendly and fantastic. Feel free to make your own reservation!

Our May schedule is full of meetings in Paris, more than I can fit into a single blog post, so I’ll randomly start with a dinner we had with composer Gilbert Nouno. Starting with Gilbert makes sense, because he’s the ideal person to eventually be a major link to Paris for my Hà Nội New Music Ensemble. His music is inspiring and his considerable knowledge of technology has given him vast experience as a sound designer trusted by Pierre Boulez (for the last decade of his career), Olga Neuwirth, Jonathan Harvey, and Kaija Saariaho, among others. We met Gilbert through our friend, conductor Kent Nagano. He was doing the sound design in Hamburg for Boulez’s Répons and we’ve been in constant contact since we met last May.

Sometimes you click with a person, and we’ve clicked with Gilbert.

Gilbert and Jan at Chez Janou at the beginning of a wonderfully long dinner.

“There is a very good restaurant we should try next time, close to the Place de Vosges,” said Gilbert last year in Montmartre, where he lives, as were planning ahead for our next Paris meeting. And so look at it this way: if a Paris friend recommends a restaurant, there is a very good chance it is for a good reason!

Chez Janou on a Saturday creates great counterpoint to conversation.

When Gilbert told us the name of the restaurant was Chez Janou, we looked at its website. I was startled, to say the least. I happen to love Pastis, the anise flavored liqueur of Marseille, and its grown-up cousin, absinthe. But I was not prepared for the reality of 80 types to choose from!

Jan and I were beyond curious, and even though Gilbert doesn’t even like the stuff, we enjoyed quite a few versions. Oh. My. God.

A few of the artisanal Pastis at Chez Janou. 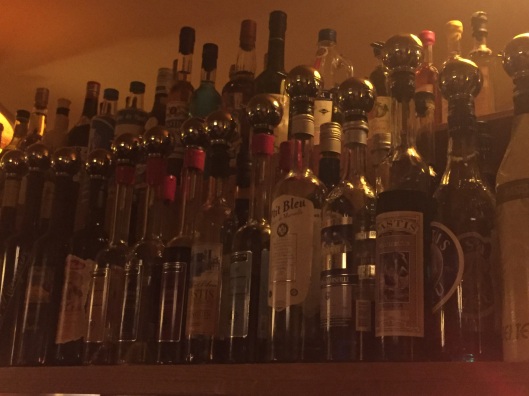 And more of the Chez Janou Pastis selection.

Each one we tried indeed had a different palette. Honeyed fennel. Pure anise, bark-like licorice, the variations were baroque. Remarkable tastes with Provençal food, as we ordered tuna with acacia honey, fried bait fish, and fish soup as appetizers and fish entrees with Pastis that kept us sunny all night long.

And we talked. And we talked. About this and about that, from big picture to small picture, details to large canvas, politics, responsibilities, ideas, music, technology, culture, East and West. Because what makes us click with Gilbert is that he’s already had much experience with Asia, including extended residencies in Kyoto, Japan. He’s made a pilgrimage to Hiroshima and Nagasaki and composed fitting tributes to those horrible experiences. And there is in his background a couple of trips to the spiritual mother of us all, India. Like many sympathetic and culturally aware French, he knows the unavoidably tragic history of France with Việt Nam, Laos and Cambodia.

A good Chez Janou portrait of our friend Gilbert.

Because one of his dreams is to explore combining technology (he is half of the year on the staff of IRCAM at the Centre Pompidou) with the ancient world of Vietnamese music. Because the inspiration point for us in the West? In Việt Nam there is the ancient music and the new music – with nothing in between. That reality is an amazing creative potential for our time.

I love how the French think!

The Ancient Ensemble of Tonkin collaborates with my Hà Nội New Music Ensemble.

We are helped in building a bridge between Hà Nội, Paris and Los Angeles by the fact that Đàm Quang Minh, one of the directors the Ancient Ensemble of Tonkin, lives half the year in Paris. Minh is in Hà Nội as we are in Paris, but when he returns to France the discussions can obviously go to the next level.

There’s a new music wave building out of Southeast Asia, and it’s coming from the Hà Nội New Music Ensemble making its impact and reputation through creative energy. And we are animating a recognition between France and the United States of positive action to redress the tumult of the last two centuries. 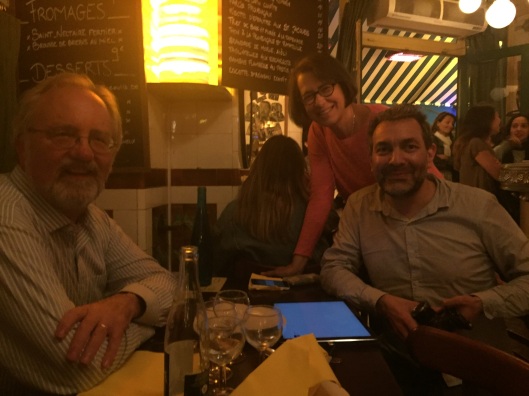 A happy trio in Paris dreaming of good things between France, Việt Nam and the United States.

As we closed up Chez Janou with its friendly staff, we walked together in the early morning to IRCAM, where Gilbert had to retrieve some things he’d left in his office. We talked quietly after the convivial activity of the busy Saturday night restaurant, about how European colonialism and American interventionism both met defeat in Việt Nam.

“We need to have our ears cleaned of Western music,” was a strong sentiment of Pierre Boulez. Gilbert enjoyed a productive and supportive relationship with Boulez, for the last decade of his conducting career, working hard on transferring the original 1980s computer technology down to a simple 21st century laptop. He had worked for Boulez for a few years before he summoned up the courage to show him his own music. He handed Boulez his best scores and waited for the next few days, naturally a little intimidated by the potential verdict.

“Gilbert, you are exactly the musician I founded IRCAM for,” came the encouraging response.

And so a circle closes and opens. Boulez was instrumental in IRCAM and Ensemble Intercontemporain commissions to the late Nguyễn Thiên Đạo and Tôn Thầt Tiết (Tiết’s commssion was given to Kent Nagano, so it’s in the family), and he served on the board of an association founded in the 1990s by Tiết to increase cooperation between France and Việt Nam. Coming to terms with next steps after Boulez’s passing lends sense to our discussions about Việt Nam with Gilbert.

President Barack Obama was on to something when he said, in Luang Prabang Laos, that the era was over where large powerful countries like France and the United States felt they had nothing to learn from smaller countries like Việt Nam and Laos. We need to bury those memories, and replace them with a new future that recognizes a larger cultural narrative that informs and inspires us all.

As the West careens into a drawn out political identity crisis of major proportions, this trio of musicians, walking in the early morning hours of Paris, is planning for a bright future. With old enemies who are new friends, connecting the world through music. It’s our job to be inspired. Stay connected as plans go from dreams to reality between Paris, Hà Nội and Los Angeles.