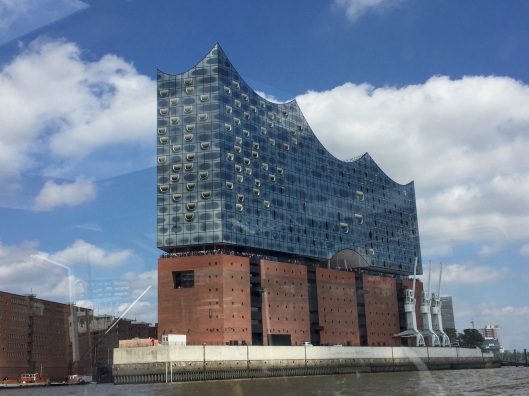 The shining new Elbphilharmonie in Hamburg.

If you’re curious why Alan Gilbert is leaving the New York Philharmonic for Hamburg’s NDR Elbphilharmonie, here’s a statistic for you. My friend Kent Nagano’s entire ten concert season at the shining new hall with his Hamburg Staatsorchester is already completely sold out. How long did it take? One hour. 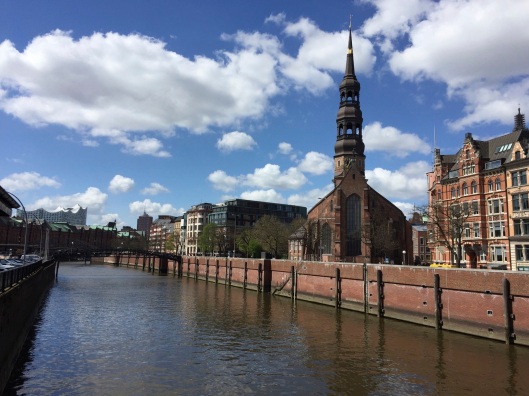 Hamburg’s Warehouse District is a UNESCO World Heritage Site. The Elbphilharmonie is visible in the distance at the end of the canal.

This was our second trip to Hamburg in as many years. Think of it as Germany’s Seattle, a fantastic city, there are more bridges here than in Venice, Italy. The city embraces water, with lakes, canals, and streams within easy and daily reach. River and ocean breezes often create vigorous winds. Johannes Brahms was born here, Gustav Mahler headed the Hamburg Staatsoper for a time, and there are strong links to Georg Phillip Telemann and the entire Mendelssohn family.

The Michael’s Church in Hamburg, where Johannes Brahms was baptized.

A lot of ideas and planning were set in motion during our first trip to Hamburg in 2016, where we discussed our work with the Hà Nội New Music Ensemble with Kent Nagano, the music director of both the Hamburg Staatsoper, which was founded in 1678 and is the oldest opera company in Germany, and its resident Hamburg Staatsorchester. The catalyst for our visit last year was a once in a lifetime opportunity to hear Pierre Boulez’s Répons and the German Requiem by Johannes Brahms on the same program. As you can see from the above photo, the Michael’s Church solved the difficult logistics of putting the two pieces together. The Boulez ensemble, with its additional far flung technology spread around the church, was positioned on the altar with the Brahms in an adjacent choir loft.

We will never forget the almost three minute silence which acknowledged the end of the Brahms German Requiem, haunting to hear in the church where he was baptized. The swirling sounds of Boulez’s Répons, which was programmed before he passed away, became an extraordinary testament to his music that night.

But Hamburg, similar to the position of Los Angeles in the United States, is the Number Two City in Germany. More culture is found in Berlin. Hamburg is seemingly an essential financial powerhouse city but not reckoned with culturally.

The Elbphilharmonie, similar to the result of Walt Disney Concert Hall here in Los Angeles, is redefining Hamburg’s international reputation. And American know how, with a now combined one-two punch from Kent Nagano and Alan Gilbert, is driving many of the artistic directions of this northern paradise.

When I think of Arnold Schoenberg, I like to imagine this rather hip photo of him in a nautically striped shirt taking a long drag on a cigarette. Taken in San Francisco, California, this image is the one that gives me the best sense of his personality. This looks like the man who wrote Pierrot Lunaire and had two major testament works, Die Jakobsleiter and Moses und Aron, ruptured by, respectively, World War I and World War II. Jan and I are in another generation here in the United States, and his Los Angeles family remain very good friends.

Kent and I share a lifelong love of Schoenberg’s music. We’ve written each other about how his achievement looms larger upon us as we get older together. So when Kent programmed the brilliantly youthful and gargantuan Gurrelieder to end the opening season of the Elbphilharmonie, Jan and I knew we had to show up and support friends and family!

The orchestra assembles for a rehearsal of Gurrelieder. The organ pipes are visible on the right. Kent is standing to the left.

So Jan and I had the opportunity to wander around the Elbphilharmonie during rehearsal breaks for Gurrelieder. The acoustics? Tremendous. I can’t give you a photo of sound, but what I can say is that the hall will only improve after more adjustments can be considered. At this point, the sound rivals the best in the world. The terms chamber music clarity and Gurrelieder don’t usually go together, but in this hall, and with Kent’s deep operatic concern for balance between voices and orchestral texture, one got as close as possible to an ideal relationship.

My impressions of the hall begin with its ship like prominence, which ideally mirrors the world of Hamburg. Water is everywhere in this city, trading is paramount, the people are cosmopolitan, business flourishes, the modern architecture is inspiring throughout the Hanseatic capital. The Elbphilharmonie is situated symbolically on top of Hamburg’s trading history.

The shining hall is placed on the top of a brick edifice resonant with Hamburg’s UNESCO World Heritage status.

And yes, it’s quite a long escalator or elevator ride up to the hall’s entrance, which necessitates even more floors. But the message is clear to me. Culture sits atop human achievement, an inspiring thought as you approach hearing music.

The views of Hamburg from this eagle’s nest vantage point are spectacular. Shipyards never looked better!

The church spires of Hamburg from the Elbphilharmonie.

The Elb River and the Port of Hamburg from the Elbphilharmonie.

The interior of the hall is subdued, with comfortable and well spaced seats in a durable grey with a cream white honeycomb stitching that helps the acoustics. One feature is that staircases connect the entire auditorium, which makes the vineyard concept fluid, finding our way backstage was quite easy. The organ is ingeniously designed into the honeycomb layering.

The vineyard terraces of one side of the Elbphilharmonie. 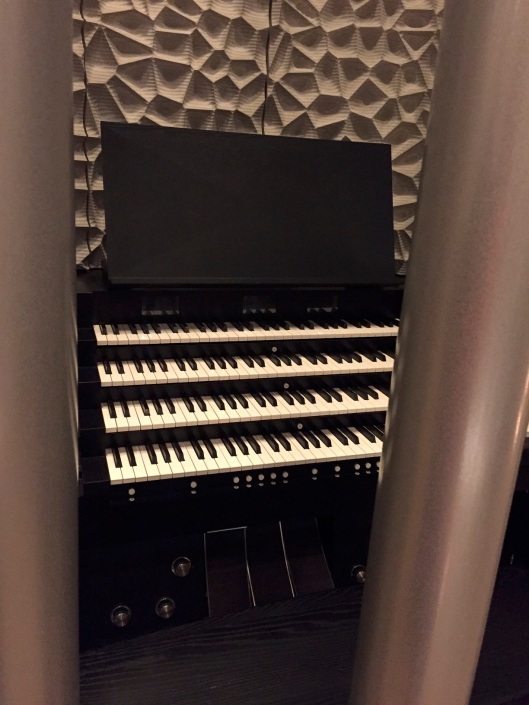 The organ is concealed behind its own pipes.

Organ pipes seen through the honeycomb. 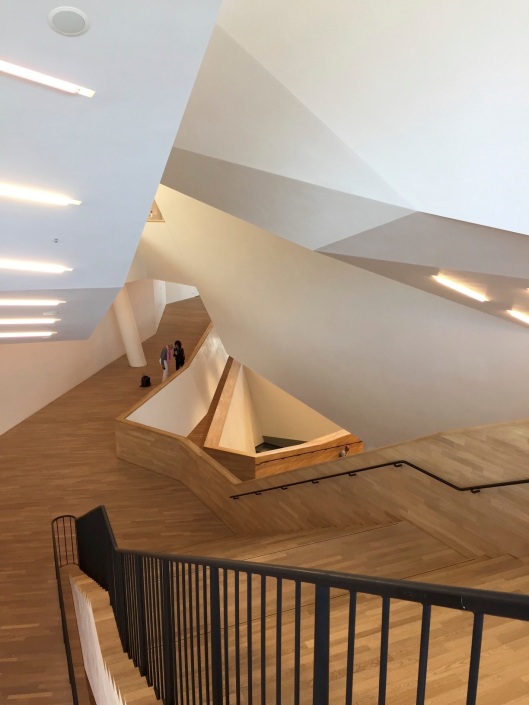 One entry level observation about Gurrelieder is its mammoth ambition. From humble beginnings as songs for voice and piano, over the years of its composition and orchestration, Gurrelieder exhibits the dual polarities that characterize all of Schoenberg.

To be successful in performance with Schoenberg’s music, one needs to consciously approach the task at hand from two simultaneous vantage points. One perspective is the old Romantic tradition that begins with Beethoven and Schubert, proceeds through Liszt and Wagner to Bruckner and Mahler before finding the crucible of Schoenberg’s personality. The second perspective is one that rejects the apparent Romanticism completely, focusing the ear on a modernity, both harmonic and rhythmic, that is antithetical to the natural inclination of Schoenberg’s cultural heritage.

In fact, early Schoenberg is often a greater challenge that any other period. The demands certainly necessitate a lot of rehearsal to achieve an accurate performance.

So to explain this idea another way, an ideal Schoenbergian needs to be a blend of Leonard Bertnstein and Pierre Boulez. Both had overwhelming but truly different points of view. I performed with Bernstein at Tanglewood and observed Boulez rehearse the entire Ring Cycle in Bayreuth in 1978. Kent was trained by them both.  He’s the only conductor to perform Bernstein’s Mass and Boulez’s Répons, that’s a fact. Their yin and yang balance is a guiding principle for us, and we’re all still in their world as performers. The Vienna Philharmonic loved them both.

Bernstein and Boulez together in New York City.

Full chorus and orchestra rehearsal with Anja Silja, seen standing at the back of the orchestra.

And so the final result of Schoenberg’s full frontal assault on the sensibilty of his Romatic era is a challenge. What could possibly follow Gurrelieder?

Creativity is never a straight line, it zigs and zags. For Schoenberg, he’d already left the Romanticism of his youth by the time Gurrelieder was ready for its first performance. Detours mark most of Schoenberg’s career, as he was not living in a stable world. His quip in later life about Richard Strauss sheds light on his own situation. “I’ve fortunately forgotten everything I learned from him.”

And those next extraordinary musical steps rear their head toward the end of Gurrelieder. The textures become more and more chamber like as a Speaker emerges to sum up the experience for the audience, in much the same way the Wood Dove’s song sums up the first part of the composition. As the Speaker’s melodrama of the Summer’s Wind Wild Ride provides us with the necessary epilogue before the final pantheistic chorus, we have a premonition, in Romantic harmony, of the indelible changes on the way for Schoenberg, and all of us with him, like it or not.

Bringing down the house with Gurrelieder.

This warning shot across the bow of Romanticism that the Speaker’s melodrama delivers is one of music’s great moments. Kent had a casting masterstroke up his sleeve when he invited the iconic Anja Silja to perform the role. Long associated with the New Bayreuth of Wieland Wagner, Silja had the presence of a living legend. Her all white suit was the perfect costume to sum up the entire experience before the full chorus’ hymn to the sun.

But after all the curtain calls, the huge response, the successful effort of rehearsals and performances achieved, Jan and I quickly made it backstage to congratulate an old friend on a major achievement. Kent is a long way away from a band room in Morro Bay in our beautiful Central Coast region here in California. He and Jan are veterans of Sarah Caldwell’s legendary Boston Opera Company. We recorded a major work of William Kraft together long ago with the Berkeley Symphony Orchestra. His wife Mari Kodama played all the Beethoven Sonatas on our series in Pasadena and Los Angeles. These are deep 40 year waters for us all.

Backstage after Gurrelieder with Kent and his daughter Karin.

Behind the scenes we of course talked thoughts and plots about numerous subjects, including next steps for the Hà Nội New Music Ensemble. Long journeys proceed one step at a time. But the first season of the Elbphilharmonie was a moment to celebrate and a resplendent and transparent Gurrelieder was just the ticket.

I’ll return soon with more posts about Hamburg, a city you’ll need to visit yourself!