The delicious red strawberries at the Saturday Farmers Market of Périgueux.

With an apple I will astonish Paris. Paul Cézanne

The impressions of the sights and smells of cuisine, of tea, of sweet and warm baked madeleines, of savory asparagus, permeate the towering pages of In Search of Lost Time by Marcel Proust. The still life paintings of Paul Cézanne helped shift perception in the visual arts to a new way of geometric seeing, the French translation of still life, nature morte, a telling Gallic metaphor for a symbolic death. The musical fruits of Erik Satie would astonish a dismissive public when he wrote Trois morceaux en forme de poire.

Cuisine, with all its timeworn clichés, still defines France.

The city wide Saturday Farmers Market in Périgueux enjoys a prime location by the cathedral.

France exerts a long arc in my life. As I become accustomed to the vantage points of my 60s, I enjoy looking back and now piecing together the map of my French attractions, which developed slowly, fold upon fold, pli selon pli.

And in my own search for lost time, I recall my mother.

Before the faux celebrity world of chefs and cuisine, my mom was a waitress in Golden Era Hollywood (including Chasen’s and 20th Century Fox), where she was a favorite of genuine celebrities such as Lauren Bacall, Humphrey Bogart, Gregory Peck, Marylin Monroe, and Marlon Brando (my apologies to Fill-in-the-Blank Celebrity Chefs of the Week but they are celebrated in the ephemeral World of Dinner. You can’t order “STELLA!”). Bacall asked for my mom to be the only server at her private Hollywood reception after she married Bogart on the East Coast. Gregory Peck would give my mom an autographed photo, which I now treasure (in her era requesting an autograph would get you fired). She had a soft spot for Marlon Brando, for all types of reasons. I attended a Jesuit high school, Loyola, at the recommendation of screenwriter Dalton Trumbo. My mom asked Trumbo for advice as to where to send me to the best school in Los Angeles. And I would study French there for four high school years, which still pays dividends to this very day.

And because of all of this cuisine experience, my mom spoke culinary French, the dominant language of fine dining in her generation. She couldn’t have done her job if she didn’t understand the vocabulary of the menu and dishes. No wonder I learned how to make so many sauces in our family restaurant!

Lauren Bacall and Gregory Peck, who mom saw on a regular basis at Chasen’s.

And then there is French music. My passion to become a musician was motivated by Hector Berlioz. Claude Debussy stills set the North Star of my musical compass. And anyone like me who is interested in new music will encounter the hothouse Paris laboratory of Stravinsky, Messiaen and Boulez.

The grave of Berlioz in Montmartre.

Finally, with my ongoing engagement with the Hà Nội New Music Ensemble in Việt Nam, my arc towards France is finally, clearly out in the open. I’m close to the finish line of language fluency, at least I’m getting great reviews from the French themselves, so it’s an encouraging time. And a sturdy new music bridge between Paris and Hà Nội is under construction as I write this post.

With my brief and personal French exposition concluded, let’s move ahead to a most beautiful summertime subject – the heart of French cuisine and the Saturday Farmers Market of Périgueux!

A vegetable vendor in Périgueux.

The old city section of Périgueux is charming, and seems basically not a major tourist attraction compared to other areas of the Dordogne Valley. Think of it as the Paso Robles of the California Central Coast to get an idea of its size. The medieval city is characterized by narrow streets that invite one to wander from one square to the next, sampling shops and bakeries and cheese stores to one’s content. 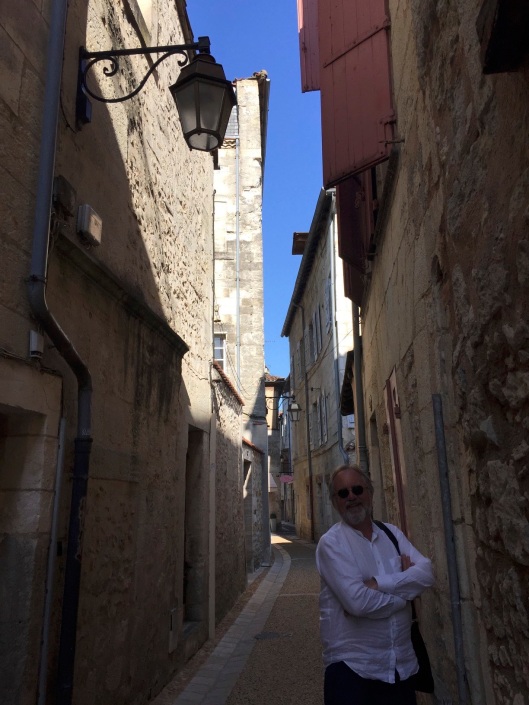 In the cool narrow allies of Périgueux.

The city also boasts a very impressive cathedral, renovated in the late 19th century by Paul Abadie, the architect of the Sacré Cœur Cathedral that towers over Paris in Montmartre. Though the Saturday market is not limited to single area or square, the cathedral provides an impressive backdrop to one portion of the proceedings.

The Périgueux cathedral forms a nice backdrop to a farmers market.

The French guard the integrity of their cuisine like hawks. A baguette can only be called a baguette if it is baked on the premises where it is sold. Wine appellations are strictly controlled by AOC origins, the sacred Appellation d’origine contrôlée. Cheese is richer, stinkier and creamier with raw milk, an American prohibition the French will never understand (and remember, Louis Pasteur was French!). An incredible repertoire of fruit and plant liqueurs, among them Chambord (raspberry), Cassis (black currant), Chartreuse (a dizzying palette of herbs with a secret recipe known to only three Carthusian monks), Calvados (apple), Farigoule (thyme), and more team up with cognac and Armagnac to create tremendous digestif choices for clearing away the rich butter, cream, fois gras and truffles that give French food its exquisite tastes. Don’t get me started on the hallucinatory wormwood elixir of absinthe, The Green Fairy of Oscar Wilde, Pablo Picasso or Édouard Manet, to name a few.

Black truffles from the Périgord in Périgueux.

Sinfully smoked and peppered duck is perfect for a salad.

The French, indeed, are perfectionists. As one Parisian friend described it to me, there is a hierarchy in France, determining the one way something is to be done. Deviation is not a concept, and if the temptation is acted out, the result is frowned upon. That baguette MUST come from the oven in THAT shop or it is NOT a baguette. Fierce argument could ensue if you doubt me. As my friend continued, she noted that once a French citizen lives outside of France, returning to this hierarchy can be difficult. So don’t be surprised that Jacques Pépin lives in Connecticut or Pierre Boulez is buried in Baden-Baden or Paul Gauguin left Paris for Polynesia and the Marquesas Islands.

The concept of reduction, the removal of all superfluity, the concentration of taste and sense to the essential, is key to understanding the æsthetic of the French. Think of perfume as one example. Or Boulez tuning a complex chord in Varèse as another. Or Proust describing a cup of tea. Studying French cuisine, you’ll come to experience the results of a ‘less is more’ way of life directly, unfiltered from words or images, which indeed is what cuisine shares with music. There are seventeen reductions to a true beef bourguignon, simmering a sauce down to more than half its size concentrates the flavor to its most intense expression. It’s a one bite world of flavor, in many ways. There is an undeniable passion to this level of excessive control of culinary ingredients (or words if you are Proust, notes if you are Debussy, or paint if you are Monet).

Put another way, the world also agrees on the romantic term “French kiss.” An immortalized moment delivered by a sizzling Lauren Bacall in To Have And Have Not comes to mind, too. “It’s even better when you help….” 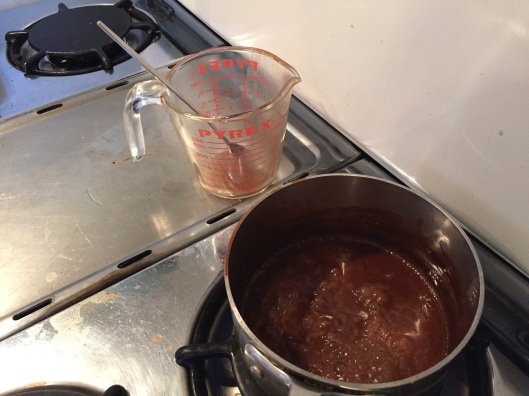 This lesson in the French psyche, of reduction ad infinitum, is important to comprehend, and cuisine is perhaps the best entry level experience into the French mindset. However, all is not champagne and caviar with this pleasurable intensity. The French vanity of consolidating a lost French Empire placed a lot of the world in harm’s way during the 20th century, disastrously so after World War II. Senegal, Morocco, Algeria, Tunisia, Tahiti and French Polynesia, Somalia, Madagascar, Mauritius, and of course closest to my heart, the Indochina of Việt Nam, Cambodia and Laos. The French always brought ovens, recipes and their baguettes, wherever they went. They also brought their guillotines and racist tendencies, creating a sea of hate that resulted in the ultimate downfall of their colonial ambitions.

In other words, it’s important to see countries with a clear mindset, be they France, Japan, Germany or the United States, and to search for the best essence of a country, stripping away the accumulation of negatives to get to the heart of the matter, an algebraic absolute value of national intent.

With France, food is never far away from any discussion. And with good reason! 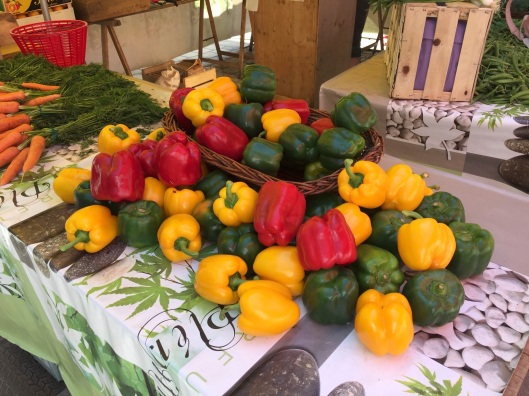 Yellow, red and green peppers at the peak of freshness.

The perfume of these melons was intoxicating!

My only frustration in wandering this Périgueux market was not having a kitchen! Cooking up any of these ingredients would have been a delight. Certainly living in California we have produce equal to that in France, so my feelings weren’t envious. My admiration and awe for the French and their cuisine grows exponentially with each fresh encounter.

Lacking a well stocked kitchen, Jan and I found a special restaurant, L’Essentiel, just down the street from the market activity. 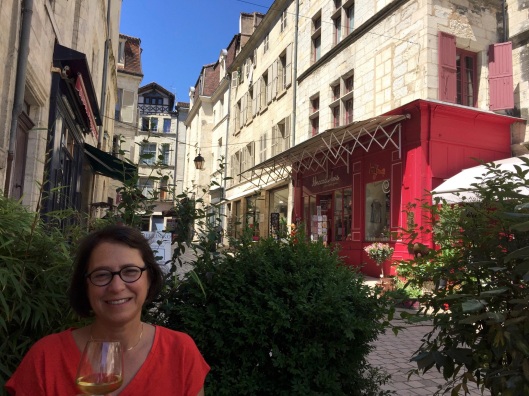 A memorable lunch at L’Essentiel in Périgueux.

The food was exquisite, it’s good to remember that lunch is always more affordable, and that French eye for perfection? Easily seen in the dessert and coffee! 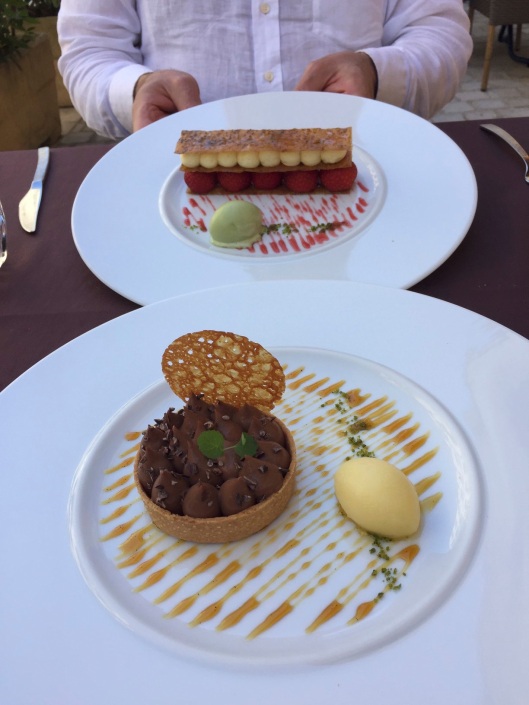 I always strike up conversations with servers, waiters, waitresses, bartenders, baristas, dishwashers, cooks and staff. On the one hand, you can influence your own experience by smiling a lot (it helps if you have questions in a foreign language, too). On the other hand, my penchant for engaging these always hard working people is that my mom was a waitress and I’ve done what they’re doing, too. Yes, they all have more on their life’s plate than your lunch or dinner. I step into any kitchen and feel I’m at home anywhere in the world. When I wash the dishes I can hear my mom’s voice still telling me how to organize the stacks of silverware, plates, pots, pans and glasses. “If I run out of silverware,” I can hear her lovingly say with her humorous laugh, “you’re dead, kid!”

I’ve only cut myself with a kitchen knife once. That was three days before my mom passed away in February of 2009. I knew her time to leave was close at hand when I put on a bandaid, feeling like an utter fool after her meticulous training of me in kitchen etiquette. I could imagine her yelling at me as I started crying, knowing what was soon to happen that cold February night. I realized then I was never afraid of a knife. I was only thinking of my mom – she’d have killed me if I cut myself during a lunch rush hour!

Nothing is random. While Jan and I were enjoying a memorable and delicious meal at L’Essentiel in Périgueux, we noticed our server, a charming woman named Nagali, whose husband is the Michelin starred chef. We were talking to her back and forth, joking, observing the wonderful food and its glorious presentation, asking her recommendations for wine and other selections. This was a great lunch, one we’ll remember forever. Nagali would bring our love of France full circle. 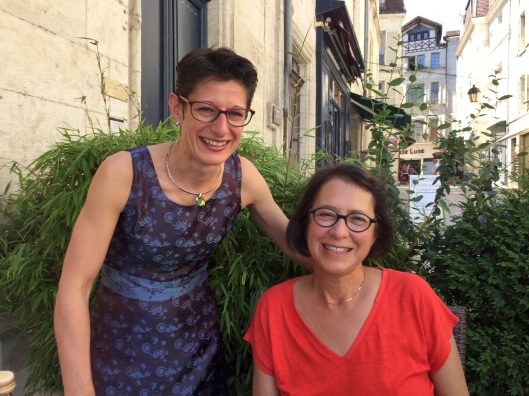 All smiles, Nagali of L’Essentiel with Jan in Périgueux.

“Madame,” I asked. “Is your dress from Việt Nam? Or somewhere else in Southeast Asia?My wife and I know the region well and work off and on in Hà Nội.”

“Oh yes, Monsieur!” she answered with a smile. “I had it made for me in Hội An. The Vietnamese cuisine has so much to teach us here in France!”

And slowly, perhaps one French reduction at a time, the world becomes a better place.