Berliners love to talk – with a blunt directness which is both rude and friendly – and even in their grumbling there is a note of pleasure. Christopher Isherwood

I’ve benefited from a good dose of internal California breathing space after visiting Berlin last month. The city was long overdue for me to experience and this was my first chance. And my lasting impression is not of monuments, museums, concerts or one of the best bus systems on the planet. No, my memory remains fixed on one thing.

With my friend Silke Hilger, director of  Ricordi Music Berlin for the Universal Music Group, atop their wind blown office on the River Spree.

Most every other place I’ve visited runs as far away from its historical dark side as possible. But that is not possible for Berlin. Its high toxicity from the Nazi regime to the stress of the Cold War makes denial an untenable position.

Inspired by Schoenberg’s opera Moses und Aron, these fractured shards suggest the Star of David at the Jewish Museum of Daniel Liesbeskind.

The Holocaust Memorial in Berlin.

There is a an old joke in Europe that Austria’s greatest miracle after World War II was to convince the world that Beethoven was Viennese and Hitler was German. Of course the opposite was true, but the joke outlines a fundamental difference between Vienna and Berlin. In Berlin, confronting and acknowledging the reality of that darkness has led the Germans to a bright new era.

The Reichstag might well be the most potent advocate to move Western democracy forward in an era of American isolationism unlike anything we’ve experienced since 1945. History deplores a vacuum, and Paris and Berlin are willing and able to fill the void of Republican Washington, but this is uncharted territory for everybody.

The Reichstag in Berlin allows the German people the chance to literally watch their government deliberations.

The meeting place for German representative democracy in Berlin, with the public looking down in constant symbolic observation.

The mantle of history is clearly accepted in Berlin. Berliners themselves are as open minded a bunch of urban dwellers as you are ever to encounter. Gone are exaggerated heavy German commands and cliches, in every cafe and street corners and bus rides and grocery stores I experienced, the conversations were as gentle as if they were in French (after all, doesn’t everything sound better in French?). Berlin’s food scene is international and exquisite, its sense of culture sets an international standard, and the Germans always can fall back on their first love, music. 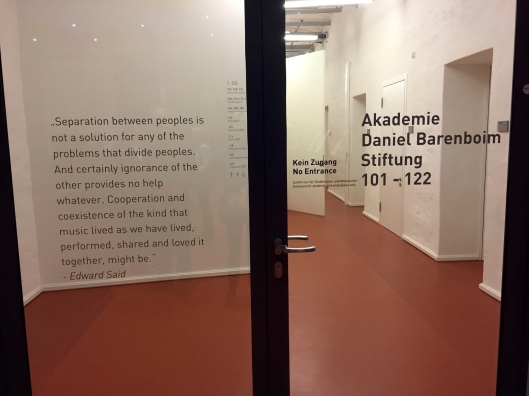 Located in the new Pierre Boulez Hall is the Academy Foundation of Daniel Barenboim, bringing Arabs and Israeli musicians together in the West Divan Orchestra.

And since artists tend to predict future trends, there is no irony to the fact that composer conductor Pierre Boulez now represents what we are all going to experience in the coming years – a blending of forces between France and Germany. It’s not an accident that Boulez is buried in Baden-Baden in Germany (or that the new main hall in the Philharmonie in Paris is also named for him, which will be another post soon) or that he returned to Paris to found IRCAM at the request of Georges Pompidou.

We are all becoming cultural hybrids.

And Berlin is the perfect city for Daniel Barenboim, Frank Gehry and Yasuhisa Toyota to work together in Boulez’s honor for the new Pierre Boulez Saal, an inspiring hall that is home to the West-Divan Orchestra, the brain child of the Palestinian Edward Said and Israeli Daniel Barenboim.

An ideal address for the Boulez Saal on Französischer Straße.

Jan and I had every reason to attend a concert at this stunning new facility, ideal for chamber music and large contemporary music groups or chamber orchestra concerts. The program we selected included Schoenberg’s Second String Quartet and Beethoven’s Septet with the first desks of Barenboim’s Staatskapelle Berlin Orchestra of the Berlin State Opera and a radiant soprano, Christiane Karg, for the last two movements of Schoenberg’s quartet.

A bird’s eye view from the balcony. 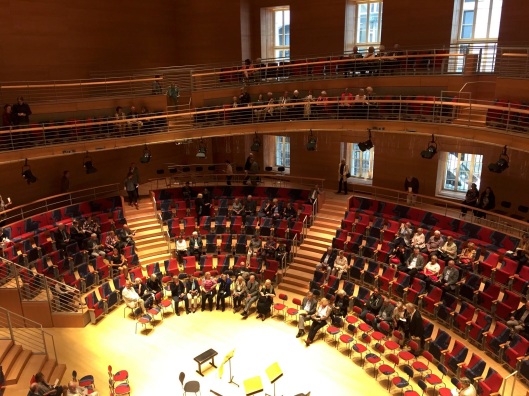 The view from our seats for the Schoenberg quartet. 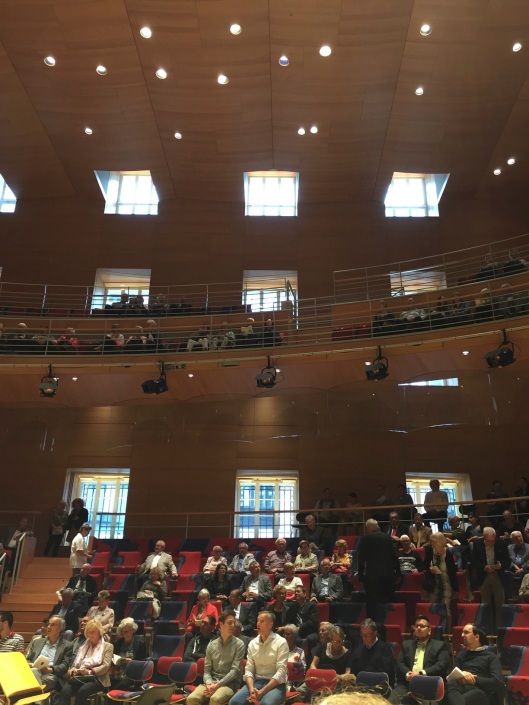 Looking up towards the balcony.

And there is an obvious connection we were establishing in Berlin for our work with the Hà Nội New Music Ensemble in Việt Nam. Boulez was himself involved with a foundation in Paris to encourage new music in Việt Nam, answering an invitation from composer Tôn Thất Tiết. Boulez advocated for commissions from the Ensemble Intercontemporain at IRCAM to Nguyễn Thiên Đạo and Tôn Thất Tiết (the Tiết premiere was conducted by my friend Kent Nagano, who now leads the Hamburg Staatsopernorchester at the new Elbphilharmonie).  So Jan and I are now able to retrofit an old bridge between Paris, and now Berlin, towards Việt Nam for a new 21st century era.

Though these plans are under still construction, our work is in the spirit and inspiration of serious new music not driven by a commercial subtext, as demonstrated by the activities of the Pierre Boulez Saal and its home to Barenboim’s West-Divan Orchestra.

And that has everything to do with the spirit of music and communication between peoples of different cultures. A deep water subject that does not easily fit into a simple box. It’s a serious subject, but in Berlin, serious subjects are not foreign immigrants. And music is at the heart of human transfiguration, of change, or if you like redemption (to use a 19th century idea easily found Wagner, who needs a lot of it himself). At least that’s my Berlin story. And I know it’s theirs, too.

Our friends in Berlin? They easily connect the dots that are obvious from our American citizenship and the diplomatic relationship we’re engaged in as we guide the Hà Nội New Music Ensemble. They’ve been there before. And live the reality that serious music, a music that confidently makes demands of its listener, gives the greatest opportunity to make the world a better place. 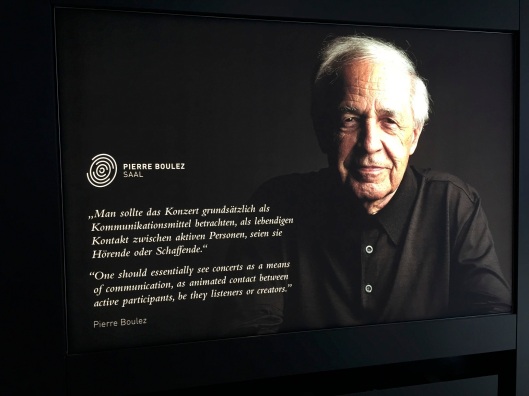 This inspiring mission statement greets you at the Boulez Saal, reminding you of why you go to a concert in the first place.

And so it wasn’t only just the people in cafes of bus rides, taxi drivers, restaurant crowds or street gatherings that create my Berlin stories. The real memory I have of Berlin is of being with the most attentive listeners to serious music I’ve ever encountered.