Dreams and celebrations for the LA International New Music Festival with Ricardo Gallardo in his Mexico City home.

After my busy autumn in Asia, the next Los Angeles International New Music Festival is in the planning stages. We hope to build on the success we enjoyed at REDCAT Theater in Walt Disney Concert Hall this past July.

I’m casting a wide net for the next festival. Thirty years of experience has taught me to carefully plan, plan, plan. And then plan some more. In baseball terms, I’m not swinging at the first pitch but rather patiently waiting for the pitch that I know I can crush out of the park!

To keep you informed as our next festival progresses (at this point dates and programs are premature), I’ll be devoting various posts from time to time to the people and places where I’m searching for the most inspiring projects. And an important new part of my life is that my future schedule has to make some important adjustments. There’s the upcoming work load in Vietnam with the Hanoi New Music Ensemble that will reshape my 2016-17 calendar and beyond. Emails, planning and repertory ideas are going back and forth as I write.

Planning retreat with the Hanoi New Music Ensemble leadership in Sapa this November.

More immediately, as in this week, Ricardo Gallardo of Tambuco is headed here to Los Angeles. Between February 12th through the 15th we’ll continue discussing next steps for inspiring projects, and he has some intriguing ideas himself involving South America, Asia and North America that need face to face meetings. To make these dreams become concepts that become specific concerts, you’ll find Jan and me in Colombia during the month of March, meeting composers and arts leaders in Cartagena and Bogota, so stay connected. We barely, barely, barely scratched the surface of the musical world of Latin America with our 2015 festival! 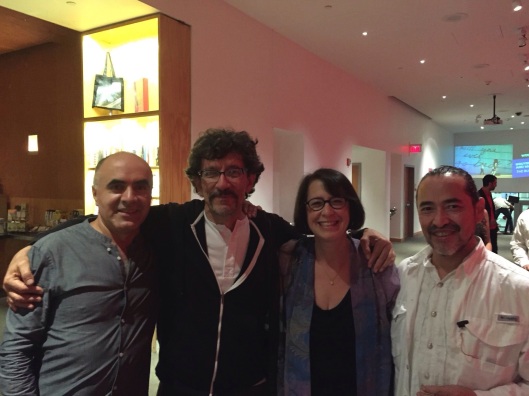 Ricardo with Colombia’s Leopoldo Novoa of Bogota with Jan and Raul Tudon at REDCAT.

Championed at REDCAT by Tambuco, meeting the young Japanese composers Takumi Ikeda, Masamichi Kinoshita, Tomoko Momiyama, and Toshiya Watanabe was one of many reasons for us to spend time in Tokyo this December. The autumn backdrop was in and of itself spectacular!

Shinjuku-Gyomae Park in Tokyo this December.

I was recently asked by a friend of mine what I find so compelling about Asia (the same question could be posed to me about Central and South America). And it’s not just the juxtaposition of old and new that is intriguing, which is relative no matter where you are. But Asia, in my experience, has an even deeper reality. The ancient and the futuristic shape imagination and ideas in startling ways.

Nothing brought that closer to home than the invitation Jan and I received from old friends Ichiro and Tami Nodaira to attend a Bunraku play with them at the Japanese National Theater, and then go to dinner after the performance.  The forceful recitations accompanied by violent strumming of shamisen or off stage drums and shakuhachi were clearly in our minds long after the performance. And did I mention graphic stage violence? Quentin Tarantino’s Kill Bill is child’s play compared to the vengeance dramas of Bunraku!

A Monday afternoon matinee was jam packed and no one in the audience even moved for a solid two and a half hours – and that was just the first half. At dinner, at a wonderful simple neighborhood hang close to their apartment, we were talking new music and ideas with Ichiro and Tami, as his most recent piece is for a Parisian solo percussionist with computer generated sounds, tailor made for our Tambuco friends. But the backdrop of ancient Japan was clearly established. Bunraku that afternoon became a shared performing experience for Jan and me with Tami and Ichiro that we will always cherish.

Over a wonderful “Snowman” bottle of sake, we were talking about music and technology, as I had not been able to program a stunning masterpiece of Ichiro’s for REDCAT because of elaborate computer issues from the early 1990s that he has now solved with a new digital transfer. Ichiro and Tami met, of all places, in Paris, not in Japan. They were both studying there, and Ichiro was connected to Pierre Boulez’s IRCAM, with numerous commissions and performances with the Ensemble Intercontemporain as pianist from time to time. In fact it was Pierre Boulez who introduced Ichiro to my friend Kent Nagano, and Kent conducted Ichiro’s Texture du delire I at its world premiere (I’ll be seeing Kent soon both here in southern California and in Europe this spring, so keep checking back to my blog). Our extended family connects more and more each time we see Ichiro and Tami.

But the computer demands of the almost 40 minute piece I have in mind have gone from the considerable complications of IRCAM in the 90s to being managed on a single laptop with a button push for each cue. Problem solved and on to next steps!

Our conversations also ranged from numerous sake toasts to meeting author Mayumi Ninomiya (aka Tami’s engaging mother who autographed her most recent book to us in Japanese), news about our work in Vietnam and knowing that one day we’ll find that pitch to hit the ball out of the park (the Japanese love baseball, too).

Jan and me with Tami and Ichiro.

Ricardo Gallardo and I are both struck now by the potential to bring the separate rivers of our contact with Asia into a wonderfully full and prosperous delta. Blend into those waters the untapped new music world of Central and South America and you have a focus that inspires both of us. And the Los Angeles International New Music Festival is the right place for this delta to have a home. We started the process in 2015 at REDCAT, but we’re just at the beginning, and the future looks bright. Meeting with Ricardo this weekend is a great next step!

One practical reason I am planning my festivals over longer trajectories is that our ideas need administrative virtuosity to match the artistic scope you hear on stage. To shape a schedule with international proportions means creating a solid time-frame for dealing with artist visas from our Department of Homeland Security (not for the institutionally challenged organization to undertake). And another reason is a response to the funding environment of the 21st century. Arts management tip: Never take your organization into Ulcer Gulch with a large project that is not fully funded. Time equals Money.

Because it would have been so wonderful to have all the young composers present at our concerts at REDCAT in Walt Disney Concert Hall!

Tambuco’s stage filling set-up at REDCAT for their all Japanese concert in July 2015.

So we departed for our fall in Asia with great contact information to meet many friends of Tambuco, including composers Tomoko Momiyama, Masamichi Kinoshita, Takumi Ikeda and Toshiya Watanabe in Tokyo. They’ve all been to Mexico under Tambuco’s auspices. My only request to Ricardo was that he program a Japanese concert of composers ready for American debuts of their pieces at REDCAT in Walt Disney Concert Hall. He’d selected quite a group of talented young composers, that’s for sure.

For all of you who attended the July concert of their music, you know that a door opened into the next wave of Japanese composers that became an indelible concert memory. Jan and I were eager to meet these four composers when we were in Tokyo. We were inspired by their concepts and vision, as Ricardo described them as ready to reshape their culture in fresh ways. All our conversations, as with Tami and Ichiro Nodaira, were punctuated by copious amounts of sake and could have extended far past the last subway train! 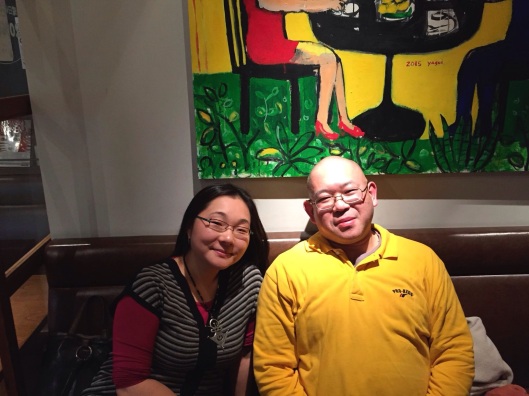 These meetings will lead us to many more future next steps with introductions to the musical life of Tokyo offered by our new friends thanks to Tambuco (as in “our violinist friend who plays all of the Freeman Etudes by John Cage” would love to meet you). So the next time we are certainly heading in or out of our Hanoi New Music Ensemble activity via Tokyo and Japan. To be continued! 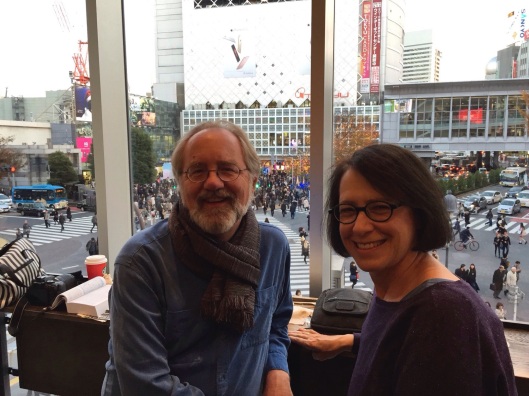 Jan and me at the Shibuya Scramble in Tokyo, one of our favorite cities (photo by fellow traveler Valentina Cosola).

One particularly happy meeting was with Tambuco’s Japanese agent, Masako Okamura, who worked closely with Toru Takemitsu. We had an enjoyable introductory coffee in Shinjuku beginning the process creating a network between Mexico, Los Angeles, Hanoi and Japan. One thing, as they say, leads to another.

I think I’ve turned 60 at just the right time. Having been inspired by new music my entire life, I’m welcoming change as the 21st century rolls along. But I also have an allergic reaction to routine and don’t need the grind of an annual subscription series after 30 years of concert production. That’s in my rear view mirror. The concept I began in 2012 with the Los Angeles International New Music Festival was to create a new initiative that was a logical response to the measurable success of the past 30 years. The festival also allows us to distill our experience to a younger generation with a strong programmatic focus. A refreshed mission, as it were, for my 60th decade. Or to paraphrase the advice of beloved actor Jack Lemmon “At some point, once you’re successful, send the elevator down.”

Tanglewood alums from two generations: with the radiant young mezzo soprano Laura Mercado-Wright at REDCAT after our Hosokawa premiere of “The Raven.”

One thread going through our international conversations is how my older generation contributes to a bright future for music over the next 20 years. I’ve had young players ask me, for example, what I learned from a long friendship with Elliott Carter (his music will remain a constant lodestar), playing under Leonard Bernstein at Tanglewood, or observing a complete rehearsal period for the epochal Boulez/Chereau production of Wagner’s entire Ring Cycle in Bayreuth. I don’t see this next phase in my 60s as passing a torch, more like lighting one with younger colleagues.

Pierre Boulez, who’s passing in January was a seismic shift from one era to the next, described creativity better than anyone. And it’s not just individual initiative that needs freedom, organizational agility needs to be present to address creativity. This way a group can react to new circumstances that demand new structures in a new era. Hence our Los Angeles International New Music Festival as we move forward. And why I’m exploring new horizons in Asia and Latin America. Because we need to learn that we are going to share our musical future with the entire planet, not just classical music’s European birthplace.

“Creativity,” said Boulez, “is like riding a bicycle. Either you keep moving forward or you fall off.”